For a while now, police have been monitoring social media, looking for people talking about their crimes past and future, then swooping in to arrest the loud mouths—like this guy.

But the social media police dragnet clearly has some holes in it, even with the most brazen crimes and online threats.

Police finally arrested a 16-year-old boy in Ottawa on Saturday for allegedly calling in more than 30 bomb threats to schools across North America over the past several weeks. The boy—who seemingly picked his targets at random or at the behest of his online buddies—would call the school, according to investigators, “saying he was inside armed with guns and bombs and was going to blow it up.”

Naturally, schools were forced into lockdown until SWAT teams arrived and police determined it was just a hoax.

“Swatting” is nothing new—kids have been using them as pranks for years. Typically, the swatter will use an anonymous web caller to mask his or her identity or location, and that’s likely how this teen evaded police for so long. But what’s remarkable in this case—beyond his sheer productivity—is that the young man in custody evaded arrest for months, even though he appears to have been publicly boasting about his swats on Twitter, as they happened in real time.

Who will be the next victim of the epic swatting tomorrow?

The Ottawa police department did not disclose the teenager’s name or social media profile. But this morning, Brian Krebs, the noted security researcher and investigative journalist, points out on his blog that the Ottawa teen had actually targeted Krebs himself twice, and had reached out to him over social media.

It’s unclear if the FBI or other investigators missed this account altogether, or knew about the account but just didn’t take it seriously. If they did know about it and did take it seriously, it’s possible they worked with Twitter to try and identify who created the account, which isn’t always that easy to do if the user is rerouting his or her IP address.

Still, as Krebs reasons on his blog post, it was only a matter of time until investigators caught on and located the person behind the account.

No words can describe how much I laughed. https://t.co/QyWmKm1M3J 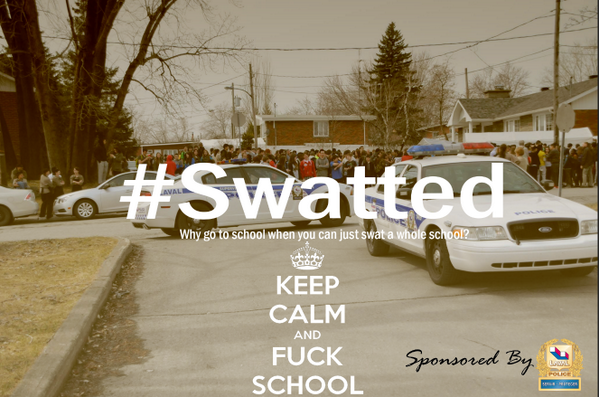 “I told this user privately that targeting an investigative reporter maybe wasn’t the brightest idea, and that he was likely to wind up in jail soon,” Krebs writes. “But @ProbablyOnion was on a roll: That same day, he hung out his for-hire sign on Twitter, with the following message: ‘Want someone swatted? Tweet me their name, address and I’ll make it happen.'”

Over the course of several weeks, the teenager spouted out several brazen tweets, suggesting he was the mastermind behind various threats playing out in schools across America.

Just got word the school that just got #swatted by me is now closed for the whole day. Thank me later kiddos.

He doesn’t appear to be faking it, either. On April 22, for instance, the teenager swatted a high school in Florida. According to the tweet’s time stamps, the chronology seems to confirm that the teenager operating this Twitter account was indeed responsible for the swats—or at least was working with an accomplice making the calls.

SWAT TIME - Who shall the cannon fire on?

Breaking news: Freedom High School, Tampa is about to get swatted.

Sure enough, this tweet appeared one hour later from the local news site.

#BREAKING: Full lock down at Freedom High & Liberty Middle Schools in Hillsborough due to bomb threat. Details to come.

The teen was pretty cocky about his exploits, and even joked that investigators were too dim or slow to find him in person.

The FBI is mad at me *eats his popcorn*

"The investigation is far from over" - FBI Come on baby, if you think you got all the answers, I'm sitting here, waiting.

I'd like to shoutout to all the cops looking at my twitter from that huge swat, wanted to say I love you, and I brought C4.

Eventually, investigators figured who was behind the threats and made an arrest. The boy now faces 60 criminal charges, including public mischief, mischief to property, uttering death threats and conveying false information with intent to alarm. He is expected in court on May 27 and is right now in his parents’ custody.

“Conditions include that he not access the Internet or make long-distance phone calls,” according to the Ottawa Sun.