Desperation in China: “God, Grant Me a Gold iPhone!”
By Emily Levy

Desperation in China: “God, Grant Me a Gold iPhone!”

With its candy-colored plastic shell, the iPhone 5C was projected to be the big hit in China, where the average annual household income is $2,100. But it turns out that the Chinese obsession with all that glitters has translated into record-breaking sales of Apple’s more expensive iPhone 5S, available in a gold-colored model that sold out almost immediately in Hong Kong and mainland China.

According to analytics firm Localytics, which studied sales of the new iPhones over a three-day period, the ratio of iPhone buyers who opted for the 5S over the 5C was actually more pronounced in China than anywhere else, including the U.S., Japan, France and Germany. The group hypothesizes, “There was a lot of hoopla around the addition of the gold-colored iPhone 5S as a very attractive addition in particular for Asian markets.”

On Weibo, China’s microblogging site, that “hoopla” continues more than a week after the phone first came on the market. Users remain enamored with the gadget, frequently commenting on how one gold iPhone sold for more than $10,000 on eBay Tuesday across the globe in the U.S.:

“Broken record! Tyrant [those with money and power] gold iPhone 5S has been pushed to 10,000 USD on eBay, this is U.S. dollars! The important thing is that it was actually sold! Chinese are not the only ones who like tyrant gold…”

“God, grant me a gold iPhone!” 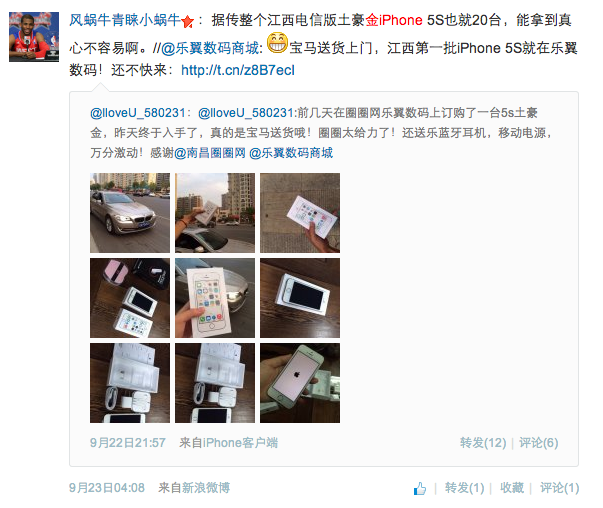 “It is rumored that all of Jiangxi telecom only has 20 gold iPhone 5S, it is truly very difficult to get…”

Apple sold more than 9 million units on its new iPhones during opening weekend alone, thanks in no small part to the booming sales in China spurred by the gold rush. Customers who pre-ordered the gold 5S in China are being told their orders won’t ship until sometime in October. To meet the unforeseen demand, Apple is reportedly increasing production on the gold model by 30 percent. And sales will only continue to increase, according to Bloomberg, if the phone maker signs a deal with China’s largest mobile carrier, China Mobile.

Some marketing experts have suggested that Apple specifically targeted Chinese customers, who have increasingly embraced gold as a symbol of wealth and influence. “It makes perfect sense,” says James Chan, a marketing consultant who sells American-made products and services in China. “It’s very Chinese. Making money in China is seen as an unblemishably good thing. The majority of people won’t think of gold as gauche. There’s no shame, no guilt, not even an aftertaste of disdain surrounding gold.”

A growing secondary market for the new iPhones has emerged online, especially now that the gold models are sold out. Ahad Virani, a full-time student at the University of Houston, has made extra cash on Craigslist and eBay over the last few years selling iPhones to buyers in Hong Kong at marked-up prices (the phones cost a minimum of 5,288 yuan, or $864, in China, but he’ll sell you one for $950). This year, of course, Virani is charging an additional $100 for the gold models.

“They pay crazy for them,” he says. “It’s iPhone season.”