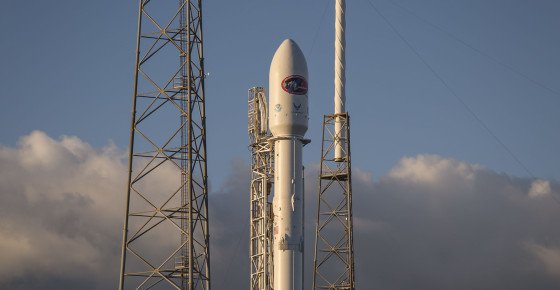 UPDATE: The launch has been postponed until this Monday at 6 p.m. SpaceX CEO Elon Musk released this statement:

We’ve been there before and it didn’t work out well: several false starts and one spectacular, fiery crash. The hope is that sometime after its 6 p.m. EST launch today, SpaceX’s Falcon 9 reusable rocket will gracefully and safely make a vertical landing on a seaborne platform anchored 370 miles east of Cape Canaveral .

As we reported earlier, this series of launches in the privately owned space-transportation company’s DSCOVR program is aimed at testing and eventually launching a recyclable vehicle that can fly past the upper atmosphere and return to Earth with an unprecedented level of logistical and financial economy. Alas, the first such attempt was riddled with delays and eventually ended in failure when the 14-story Falcon 6 approached its football-field-sized landing pad at a 45-degree angle, resulting in this awesome, if expensive, Vine.

Now compare that with video of SpaceX’s Grasshopper rocket, which, at roughly half the size and without a payload vehicle, executes both launch and landing flawlessly.

Less exciting, yes—but this is how it’s supposed to look. Weight, size, an attached reentry vehicle, foldaway landing gear and a landing pad placed on a barge in a rolling ocean instead of farmland are just a few of the factors that make safely operating the Falcon 9 exponentially harder. Then again, SpaceX had a few problems with the Grasshopper to overcome as well, so one must have patience with these things.

For today’s attempt, engineers have added twice as much hydraulic fuel to the stabilizing fins in hopes of preventing the loss of pitch control seen in the last launch. So far, the weather looks good, the rocket is in place and takeoff is still set for 6 p.m.