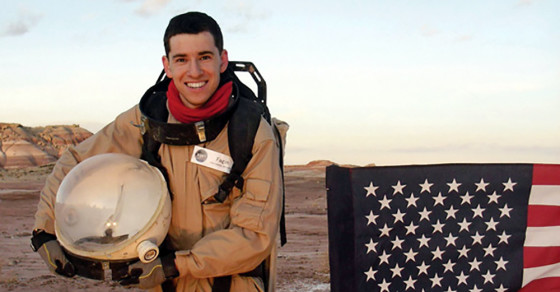 Why the Hell Does Max Fagin Want to Die on Mars?
By Joshua A. Krisch

Why the Hell Does Max Fagin Want to Die on Mars? 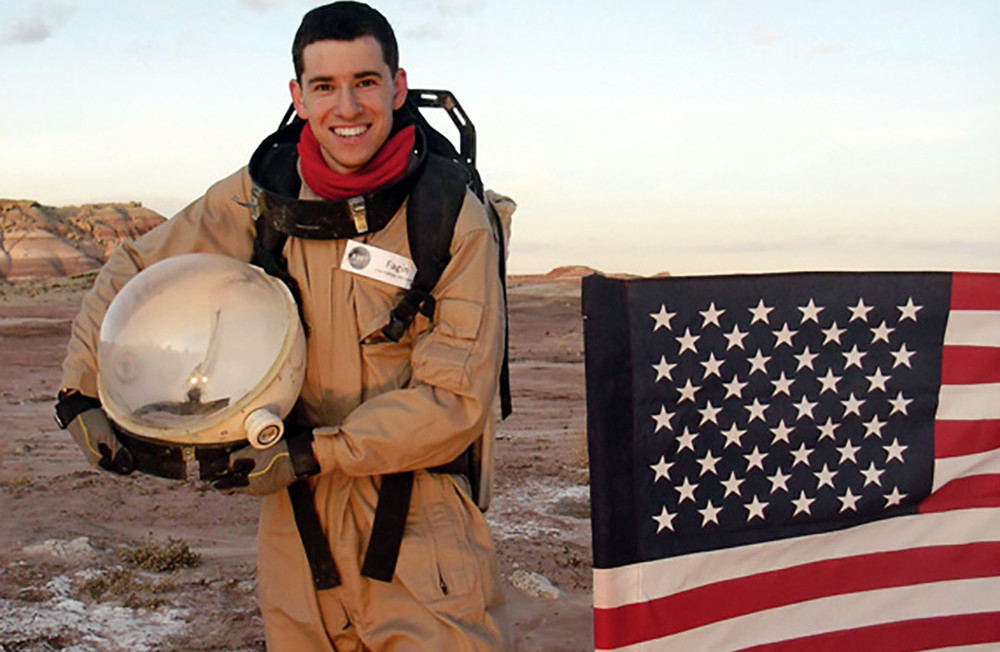 Nothing beats a trip to Mars. Setting foot in a new world, claiming another planet for Team Earth—it’s all pretty thrilling. So in 2012, when a tiny Netherlands nonprofit called Mars One announced its intention to build a human colony on the Red Planet, thousands of people applied for the four spots available.

But there’s one major catch. The Mars One mission is a one-way trip.

It probably says something awful about our planet that over 200,000 people initially expressed interest in leaving Earth behind forever. But once Mars One narrowed down the applicant pool, 705 second-round candidates emerged. One of them is Max Fagin.

Max Fagin is a strong candidate—he’s an aerospace engineer with a résumé that includes stints at the NASA Academy and the Mars Desert Research Station. Fagin likes hiking and, well, Mars stuff. We caught up with him to ask why he wants to leave Earth, whether he plans to have kids on Mars and, of course, what the food will be like.

Why do you want to go to Mars in the first place?

I’ve wanted to go into space for as long as I can remember. But Mars as a specific destination started when I was 12 and read The Case for Mars, by Robert Zubrin. That book eloquently laid out both the how and the why of human Mars exploration. On a more personal level, the colonization of Mars is probably the greatest engineering challenge facing our species today, and I find that I am happiest when I have a difficult engineering challenge to bend my mind on.

But you’d stay there forever. Forever. Why do you want to die on Mars?

I don’t want to die on Mars any more than I want to die on Earth. But everybody dies eventually, and until we’ve solved that problem, I intend to get the absolute most out of the life I have. And I can’t think of a more interesting, challenging or personally gratifying way to spend that life than by helping to make humanity an interplanetary species.

No. But even if I was, life has burned bridges like that no matter what planet you’re on. Many of the early American settlers arrived here in situations where return was effectively not an option, either due to lack of transit, or dangerous conditions in the place they left behind. But plenty of them managed to adapt. Even in our modern world, no one I know reaches the end of their life and says, “Wow, I really wish I had had taken fewer risks, embraced fewer challenges and gone on fewer adventures.”

What about the ship or the Mars settlement? Are you worried about something catastrophic happening out there?

Absolutely. Aerospace engineering requires you to have an almost morbid obsession with how things can go wrong. You have to dream up the most awful possibilities, because that is the only way to design your system to survive them. But while failures can’t always be predicted, they can often be prepared for. And I am convinced a one-way human mission to Mars can be designed to be robust enough to give us good odds of dying of old age on Mars.

What does your family say about all this?

My family has always encouraged me to do exactly what I wanted to do, regardless of what that was. And since I’ve wanted to be an astronaut for basically as long as I’ve been alive, they’ve had a long time to come to terms with me doing something potentially life-threatening. And they’ve accepted the concept of a one-way trip with just as much enthusiasm as they did my initial astronaut aspirations!

What about your future relationships? Could you marry a fellow crew member? Any thoughts about raising children on Mars?

Crews on human spaceflight missions often share a bond that is in many ways stronger than a marriage, so I don’t really see why a marriage would be necessary. But having children on Mars would be very irresponsible until the colony had developed the capacity to support them. Once we reach that point, we should remember that no place is ever really colonized until a new generation has been born there. I don’t know whether I will live to see that time come. I’d like to, but it depends on far too many factors that I can’t predict right now.

OK, less serious question. What will the food be like? What if it’s awful?

I’m kind of ambivalent towards the food issue. Eight years of studying engineering has blurred the distinction to me between food and sustenance. If left on my own schedule, I generally eat when the hunger gets bad enough to distract me from my work—I expect my order of Soylent to arrive in the mail sometime next month. So beyond ensuring that there is enough food to keep the crew healthy and active, I’m not really worried about it.

Max Fagin during a training in February 2011.

Do you think they’ll select you in the final round? What are they looking for?

I obviously hope I’ll be selected, but I plan to wait and see. Mars One has said that they are looking for two main things: (1) a desire to go and (2) a good sense of humor. I think, as the process proceeds, they will also begin to emphasize (3) technical know-how and (4) work ethic as important factors as well.  I would consider myself qualified in all four of those fields.

What would you contribute to a fledgling Mars colony?

A very broad understanding of the technical systems that will be keeping us alive, and a desire to expand and improve them.

What advice do you have for aspiring Mars settlers?

Don’t ever forget the context that humanity exists in here on Earth, and how fragile our existence is as long as we are confined to one planet. In your day-to-day life, it’s easy to forget that humans have been on Earth for a few tens of thousands of years, but life has been on Earth for a thousand-thousand-thousand-thousand-thousand years. And how many of the species that have lived in that time have survived until today? Not many. The lifetime of a single-planet species is limited. Once we are on multiple planets around multiple stars, the lifetime and size of our species is bounded only by the lifetime and size of the universe. That is the path we are choosing when we take the comparatively minor first step of colonizing Mars.

The Mars One mission has already been delayed several times, but its goal is still to have its astronauts picked by next year and send human beings to Mars by 2024.