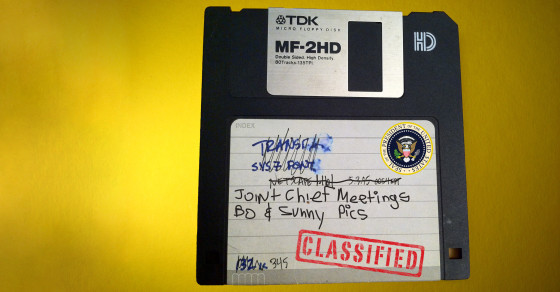 A New York Times article published over the weekend shed light on a very worrisome situation at the White House—and it has nothing to do with the president’s immigration policy, Gitmo or even North Korea.

Apparently, Megan Smith—President Obama’s top technology adviser and former Google executive—is attempting to bring the administration into the digital age, but things are much more dire than one might think. According to the article, the White House’s cringeworthy arsenal of tech includes BlackBerrys, 2013 Dell laptops and those antiquated 3.5- and 5.2-inch plastic storage squares known by the moniker “floppy disks”–that should have gone the way of eight-tracks. The administration’s use of the technology points to a pretty blatant failure to keep up with the times.

Developed in the late ’60s and available commercially in 1971, floppy disk technology is now obsolete (and has been for about a decade). Not only have other, better physical storage tools emerged—CDs and USB sticks among them—but also the world has all but abandoned physical storage devices entirely. Dear Obama and friends: Welcome to the cloud, where 1.44 megabytes of storage is laughable.

If you want to actually get your hands on a floppy disk today, secondary sellers like Amazon and eBay are your best bet. Sony, formerly one of the largest producers of the floppy disk, announced back in 2010 that it was killing off the storage device. The company ultimately ended production of the disks in 2011, leaving no manufacturer in the market.

Sure, you can still buy a 10-pack of floppies for less than $4 if you are feeling nostalgic, but the real issue is that there are so few computers left which are compatible with the disks. Keep in mind that Apple abandoned the floppy disk drive way back in 1998 with its iMac G3 personal computer. In a 2013 interview with Fast Company, Tom Persky of FloppyDisk.com, which sold floppies, explained that he had to evolve his company because of the scarcity of floppy-compatible devices. Now the purveyor of floppy disks offers services to transfer data from old disks to CDs.

In the wake of WikiLeaks and the Snowden scandal, the Kremlin reportedly went old school and bought up a bunch of old typewriters to “prevent security leaks.” But the White House’s use of the esoteric technology doesn’t seem to be a security play. It just seems silly.