The Senate drone caucus has been cruising under the public radar as it pursues its mission to promote the interests of the burgeoning unmanned aerial vehicle industry.

Set up last September by the bipartisan duo of Sens. Joe Manchin (D-WV) and James Inhofe (OK-R), the Senate Unmanned Aerial Systems Caucus has no website, and — until now — its full membership has never been publicly reported. The only official mention of its existence is a short press release from September announcing its formation, though none of the members beyond the co-founders.

Vocativ obtained the full membership list of the caucus. 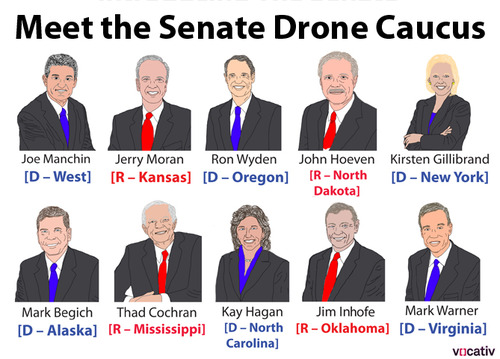 It is effectively an upper-chamber sibling to the House Unmanned Systems Caucus, which has been preaching the gospel of drones for more than three years.

“The purpose of the caucus is to inform Senators and staff on all unmanned systems,” a spokesperson for Sen. Manchin wrote in an email to Vocativ. “There is no funding for the Senate caucus.”

Current FAA rules restrict widespread drone use until at least 2015. But everyone from local law enforcement to hobbyists and farmers to journalists are eager to use UAVs. The military and intelligence communities, of course, are already actively using the technology.

As the industry grows, drone makers have been rewarding many of their allies on Capitol Hill with generous campaign donations.

House caucus members took in nearly $8 million in UAV-related campaign contributions over the past few years, according to the Center for Responsive Politics. Senate members are also flying high from drone makers.

Here, an introduction to the Senate caucus members and some of their industry ties, not all of them financial:

JAMES INHOFE (R-OK), Co-Founder
A senior member of the Senate Armed Services Committee* and an “avid pilot” who has logged more than 11,000 flight hours, Inhofe has received nearly $50,000 from BAE Systems, the British arms giant that makes “Taranis” unmanned aircraft. All told, more than $1 million of Inhofe’s $7 million fundraising total during the 2007-2012 election cycle comes from defense and technology industries.

JOE MANCHIN (D-WV), Co-Founder
Also a member of the Senate Armed Services Committee, Manchin saw a drone-related furor in his home state of West Virginia last year after a strange UFO-like aircraft was photographed hovering in the sky. It turned out to be a drone made by defense contractor Northrop Grumman, which has a major facility in West Virginia.

MARK BEGICH (D-AK)
Following Congressional approval last year of President Obama’s Bill to Proliferate Drone Use in US Airspace — the legislation that set 2015 as the date to loosen restrictions on drones — Begich drew up a similar bill in his home state of Alaska. The oil industry, seeking to harness the technology for exploration and production, was particularly cheered by the news. “The state will be a key player in drone research,” Begich said.

THAD COCHRAN (R-MS)
Northrop Grumman figures as Cochran’s top contributor, having donated just under $50,000 to the lawmaker during the 2007-12 election cycle. Cochran was also a behind a 2010 Mississippi initiative known as “drones against drugs.”

KAY HAGAN (D-NC)
In Hagan’s home state, North Carolina State University has pursued a bid to become one six official drone test sites for the federal government. Drones are also fequently seen in the sky above a number of large military bases in the state.

KIRSTEN GILLIBRAND (D-NY)
In 2010, Gillibrand earmarked $2 million for the so-called Military Drone Project, a federal research grant awarded to the Rochester Institute of Technology in her home state. “RIT is a world-class institution conducting cutting-edge research into unmanned surveillance and drones,” said Gillibrand, who got the initiative included in the Defense Appropriations Bill.

JOHN HOEVEN (R-ND)
Hoeven’s home state of North Dakota will go down in drone history as the site of the first-ever UAV-assisted arrest of a U.S. citizen. Nelson County Sheriff Kelly Janke deployed a predator drone over land owned by the Brossarts, a family of reportedly “very dangerous” farmers, after they allegedly stole several cows from a neighboring farmer. Their arrest was upheld by a federal court last August. North Dakota University is also one of three institutions nationwide to offer a bachelors degree in drone operations.

RON WYDEN (D-OR)
Wyden’s second-largest donor is conglomerate Berkshire Hathaway, owner of FlightSafety Inc, a “high-tech” training provider with a strong focus on drones. According to reports, economic development officials in Central Oregon are pushing for the Bend, Ore. area to become a national drone-testing hub. Boeing subsidiary Insitu, a major developer of drones, already provides an estimated 500 jobs in the state.

JERRY MORAN (R-KS)
Moran’s home state of Kansas is home to another of the universities that awards drone-related BA degrees. Kansas-based Koch Industries (owned by these guys), which has given $67,000 to Moran, was involved in a controversy surrounding a recent PBS documentary about drones. A Koch-connected foundation co-funded “Rise of the Drones,” which was roundly criticized for being pollyannaish on UAVs.

MARK WARNER (D-VA)
Northrop Grumman, headquartered in Virginia, is one of Warner’s top donors, having contributed more $65,000 to the lawmaker. Virginia is also shaping up as a testing ground for drone regulation: the general assembly passed a first-of-its-kind bill that would impose state-level restrictions on drone use.

* An Armed Service Committee staffer tells Vocativ that there is no affiliation between the committee and the Senate Unmanned Aerial Systems Caucus, despite having five members in common: Inhofe, Begich, Hagan, Gillibrand and Moran.