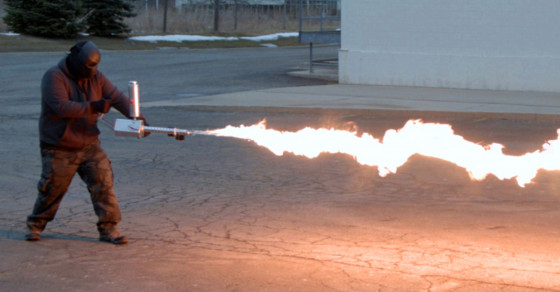 Coming Soon: Your Very Own Flamethrower For $699
By Shane Dixon Kavanaugh

Coming Soon: Your Very Own Flamethrower For $699

The U.S. got pummeled by snow this winter, which meant hours of shoveling sidewalks and chipping ice off of driveways. Now, a company called Ion Productions says it has a much better solution: the first flamethrower for homeowners.

Ion, a video-game company, hopes to cash in on man’s eternal fascination with fire and guns— as well as lax laws across the U.S. Billed as “the world’s first commercially available handheld flamethrower,” the XM42 spews 25-foot columns of combustible fuel. It sells for $699, and can be topped off at any neighborhood gas station, according to Ion.

Flamethrowers were used by militaries during trench and jungle warfare last century — to do everything from busting bunkers to clearing brush. Ion hasn’t marketed its flamethrower as a weapon, focusing instead on a host of purported practical and domestic uses. Among them:

“As of now, flamethrowers are a fun toy for responsible adults and are useful utility devices,” the product’s website says.

They also appear to be legal in 48 states. Only California and Maryland have laws that explicitly ban unlicensed flamethrowers, according to the company. Still, Ion recommends that would-be owners consult state and local regulations.

Flamethrowers Are Legal In 48 States

The XM42 follows the recent release of other high-powered firearms that do not fall under current weapons regulations. Last month, a bespoke gunsmith unveiled the “Redneck Obliterator,” a DIY gatling gun made out of six semi-automatic rifles equipped with high-capacity magazines. Perfectly legal, it sold for $3,450 at an auction in Illinois.

The Cincinnati-based Ion, which also designs first-person shooter video games, says its goal with the flamethrower is to “bring fun and awesome products into the world.”