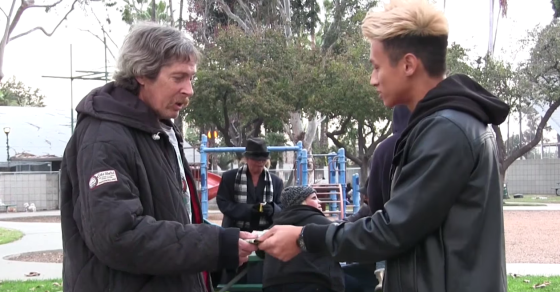 Did Josh Paler Lin Stage His Viral Video About Helping the Homeless?
By Shane Dixon Kavanaugh

Did Josh Paler Lin Stage His Viral Video About Helping the Homeless?

Days before Christmas, Internet prankster Josh Paler Lin set out to capture a simple social experiment on video. The YouTube star, better known for his sex in bathrooms and mafia gags, decided that he’d give a homeless man named Thomas $100 and then secretly follow him around to see how he’d spend the money.

The video, released on Monday, shows Thomas as he takes a stack of bills and walks right into a liquor store. But instead of booze, the homeless man walks out with a couple bags of food, heads over to a nearby park and starts giving it away to other people down on their luck. Moved by the selfless act, Lin then confronts Thomas and tells him that he’s being filmed.

“There’s things money can’t buy,” the homeless man says. “I get a happiness out of what I’m doing.”

With its surprising plot twist and selfless central character, Lin’s social experiment lit the Internet ablaze this week. By Saturday morning, the video had topped 24 million views and earned its creator international headlines. Meanwhile, the outpouring of support for Thomas became so great that Lin launched an Indiegogo fundraising campaign to “help Thomas get a fresh start.” It’s now netted more than $112,000.

But if 2014 taught us anything about viral social-experiment videos, it is that viewers should be skeptical of their creators until proven otherwise. In the last year alone, they have duped millions by staging videos of cops racially profiling Muslims, creepy dudes trying to take advantage of drunk girls and even a video of a heroic Syrian boy rescuing a girl amid a barrage of bullets. Keeping these hoaxes in mind, we reached out to Lin on Friday night.

By the time the interview was over, we were left with even more questions.

The YouTube prankster insists that he didn’t stage the video, and now has even bigger plans for the Internet’s latest folk hero. How Thomas feels about all of this remains unclear. After Lin’s video exploded on Monday, he says he plucked Thomas from the homeless shelter where he’d been staying and put him up in a hotel, the name of which Lin will not disclose. Lin also says he has kept Thomas from speaking to any media.

During his interview with Vocativ on Friday night, Lin declined multiple times to let us speak with Thomas, though he claimed he was with him. However, Lin insists that Thomas is being well cared for. Over the last few days, Lin has published a number of photos on his Facebook page showing Thomas eating dinner at different restaurants with Lin and his friends. He says he has purchased Thomas a cellphone so the two can stay in touch throughout the day. Lin also says he’s taken Thomas to get a haircut and shopping at Nordstrom to “clean him up.”

“Basically I’m trying to help him get his life back together,” Lin says.

All of Lin’s hard work will be revealed on Sunday, when he plans to release a new video about Thomas on his YouTube channel. “It’s going to be an extreme makeover,” Lin says.

Then, following Sunday’s big reveal, Lin says he has another media event in the works where he will surprise Thomas with all of the money that’s been raised for him on Indiegogo. Asked about the money raised on Indiegogo and how the public could be certain that all of it goes to Thomas, Lin says his lawyers, agent and manager have everything “covered.” When asked for the names of his lawyers, agent and manager, Lin refused to provide them, claiming they are “confidential.” He also declined to let any of them speak with Vocativ.

Lin bristled at the suggestion that any part of his original video had been staged or scripted. “Anyone who thinks that hasn’t ever met the kinds of people who are out there [on the street],” he says. “There is is no way we’re making this up. This is real. They don’t know Thomas. They don’t know his whole story.”