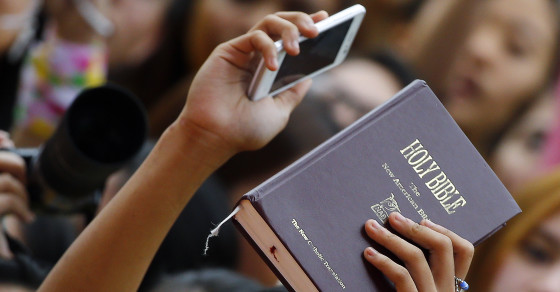 Today in the Philippines, six million Catholics attended a mass led by Pope Francis in Manila’s Rizal Park. It was in all likelihood the single largest religious ceremony in history. But there was a snag for the photo-friendly faithful: They couldn’t upload live posts, snapshots or videos of the event.

Reports suggest that local telecommunications companies temporarily shut down their services in the metropolitan Manila area to thwart any communications or posts that might compromise the pope’s safety.

Apparently the government issued a request to Globe Telecom Inc. and Philippine Long Distance and Telephone Company (PLDT), asking the mobile network operators to disable their services in areas where the pope was holding events. Additional reports suggest that Smart Communications and Globe Telecom apologized for the shutoff.

Vocativ managed to detect several posts referring to the shutdown:

Globe! Signal please! It's been three nights and two days! I'm not anywhere near the pope! So, please! pic.twitter.com/l0rLycWyrL

Because Pope is already back at Apostolic Nunciature, all telecom signals are back. Hehehe i find it amazing… Like seriously. Hehe

Guys please stop ranting about the telecom signal, its for the Pope's safety. Go with the flow lang tayo.

To the Catholics who blamed the Pope for the traffic and disruptions of signal, you should be ashamed of yourselves. #GetALife

In a way, I'm thankful that we had weak signal these past days coz I was able to focus on Pope Francis and his teachings. #BlessedByThePope

Interior and Local Government Secretary Manuel Roxas II confirmed that mobile phone signals from all networks were switched off when Pope Francis was outside the Apostolic Nunciature, his temporary residence during his visit to the Philippines.

1/3 Our government is too lazy and stupid to gather intel and provide well-planned security for the Pope.

2/2 That is why it has to resort to keeping the Pope away from the people, and to order telcos to shut off mobile services to millions.

3/3 Now, millions cannot see or touch the Pope, and millions have no mobile services, because of our government's incompetence.

A day without cellular signals, worth to watch the mass of the pope without any distractions. @Pontifex #BlessedByThePope

Back on Jan. 15, local reports were already mentioning warnings from top Philippine companies about weak signals and an unreliable Internet connection during the papal visit.