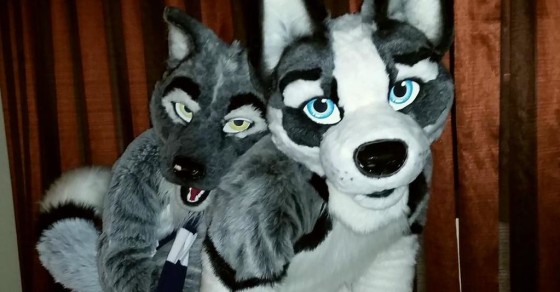 Leave It to Furries to Have Fun in a Chlorine Attack

Look, there’s nothing remotely funny or amusing about a surviving minor chemical attack—especially if surviving it means you have to be evacuated into subzero temperatures. But somehow the attendees of this weekend’s Midwest FurFest—a convention of likeminded souls who gather to put on animal costumes, dance up on one another and, we hope, have incredible furry sex—turned what was a terrifying situation into something both absurd and charming.

At 12:40 a.m. Sunday night, authorities ordered the evacuation of the Hyatt in Rosemont, a Chicago suburb, because of fumes from what would turn out to be an intentionally released burst of chlorine gas in a stairwell. The attack, which is still under investigation, would ultimately send 19 people to the hospital for minor injuries. It’s a story that would have been notable even if the Hyatt weren’t also hosting the aforementioned Midwest FurFest.

But the Hyatt was hosting the FurFest, meaning as panicked attendees headed out the doors and past emergency responders, many of them did so in full fuzzy costume.

Furries are, if you did not know, a particularly…special sort with their own brand of humor. As you can see from the tweets and images below, many young, costumed revelers (and the people who love them), reacted to what could have been (and still could be) a terror attack with humor, patience and, for loss of a better word, grace.

Police have arrived it's a real con now #MWFF why does this keep happening to meee? pic.twitter.com/I1sTZJGoUo

"Help I don't know what to do with all these delicious cookies! D:" - @FreezeFrameFox after buying cookies for everyone stuck at McDs. #MWFF

The calmest trooper bab from all of this ; 3; probably one of the charity animals. #MWFF2014 pic.twitter.com/JxY5r6c8dw

Back in my room I can finally go back to sleeping. Ty staff who did their best to keep us safe! #mwff pic.twitter.com/X9aG4NE7Do

Here’s a livestream of the entire evacuation.