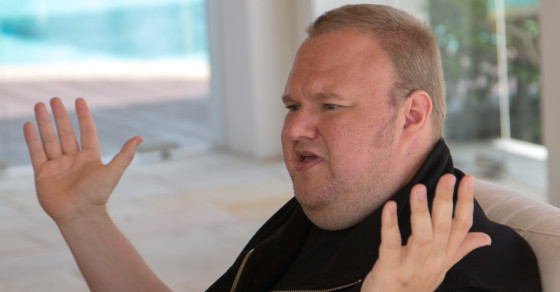 Two years ago, Kim Dotcom was worth about $200 million. Today, he says, all that money is gone, and he might be headed back to jail.

The German-born Kim Dotcom at his house in Coatesville, New Zealand

The Dotcom saga started well over a decade ago, when the German-born entrepreneur founded Megaupload.com. The site, which allowed users to upload videos, grew to become one of the world’s top-50 most-trafficked websites before it was shut down by federal authorities, who claimed Dotcom was profiting off of copyrighted material.

Dotcom has always maintained that he complied with takedown requests, but regardless, the US Justice Department has been fighting for his extradition. Dotcom maintained an extremely lavish lifestyle–at one point, he owned New Zealand’s most expensive home, a $24 million mega-mansion. But apparently, in the last two years, with all of his assets frozen and his claims of spending $10 million alone in legal fees, the money has run out.

Dotcom clearly revels in media attention, so it wouldn’t be too surprising if his claims of being absolutely broke are a bit of an exaggeration. But if court officials decide in an upcoming hearing to revoke his bail, he faces jail time.

“I’m defenseless,” the former Internet mogul told the UnBound confeference via Skype. “When you travel around on private jets and you go around with cars that have number plates saying ‘God,’ ‘Stoned’ and ‘Mafia’ on them, it’s probably not the best for keeping a low profile.”

He added: “This might be my last public appearance, and if I go back to jail, you can tell everybody that was the one.”