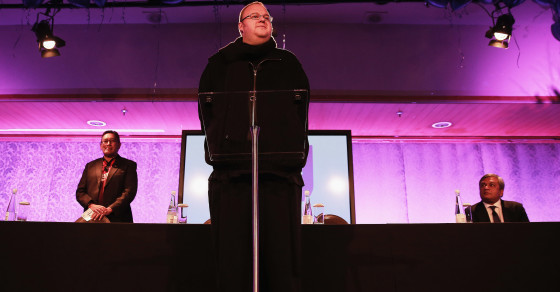 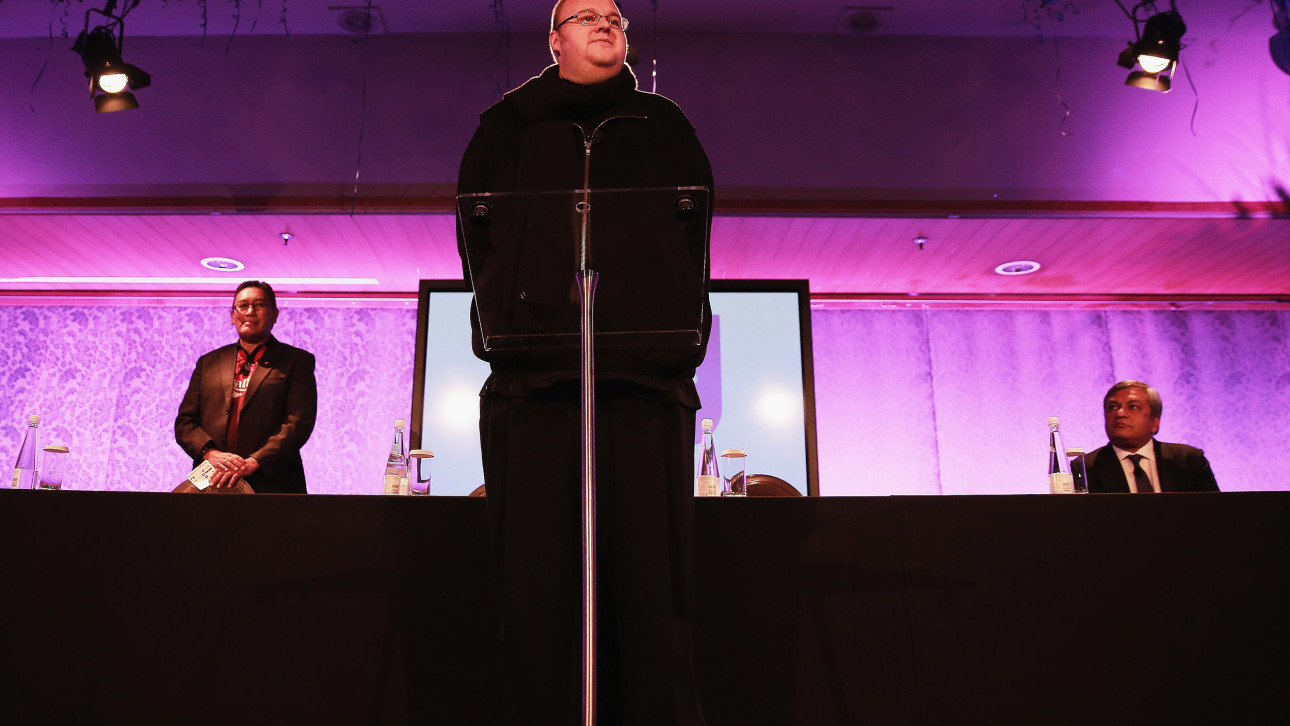 Disgraced German Internet tycoon Kim Dotcom has found his second act. The wealthy web entrepreneur, who’s wanted by the U.S. government on digital piracy charges regarding his now-defunct file-sharing site Megaupload, is going into politics in his adopted home of New Zealand.

Dotcom launched the Internet Party in January with a pledge to focus on Internet privacy and government surveillance. The head of the new party, 48-year-old Laila Harre, announced at a press conference today that they would “change the government,” and that “this is going to be awesome.”

Former leader of the Alliance Party, Laila Harre speaks as leader of the Internet Party at the Langham Hotel on May 29, 2014 in Auckland, New Zealand.

It’s certainly been interesting. Also this week, Dotcom and his group joined forces with the nationalist Mana Party, which the outspoken Maori activist Hone Harawira leads. Their alliance against the current government, led by Prime Minister John Key, could help the parties secure a handful of seats in the 120-member Parliament come September’s elections.

New Zealand election rules state that a party must win at least 5 percent of the vote to earn a seat in Parliament, which is a challenge for new groups like Dotcom’s. But the Mana Party’s Harawira is already a member of Parliament, and if he keeps his seat, the 5 percent rule won’t apply to the Internet-Mana ticket.

On paper, the alliance looks like a political marriage of convenience. The Internet Party is urban and middle class, while the Mana Party, according to its website, sees itself as a voice for “the poor, the powerless and the dispossessed” (including the indigenous Maori) and aims “to empower them against the government by the rich and powerful.” Yet there’s at least some ideological overlap between the two groups: Mana activists, for instance, are often present at Occupy rallies.

Not everyone is thrilled about the merger. At least two Mana Party members resigned over the new partnership, including Sue Bradford, who accused Mana leader Harawira of “sucking up to German millionaires.”

Have resigned from Mana, accept totally that it's their democratic decision to go with Dotcom, but it's a big mistake https://t.co/cURk4kU9HB

Harawira has been a larger-than-life figure ever since he first took office in 2005. He once called former Australian Prime Minister John Howard “a racist bastard” and is prone to swearing when discussing matters of race. He split with the Maori party in 2011 over its support of the government and established the Mana Party, which has garnered support from non-Maori left-wing activists.

Dotcom, however, can wield the financial might that Harawira lacks. At today’s press conference, Dotcom told a New Zealand news station that he has put $4 million of his own money into the Internet-Mana party. “I’ve this week funded the Internet Party in full so it will take them all the way to the campaign and beyond,” he told ONE News.

Despite the surrounding controversy, Dotcom is convinced that, as Harre declared, the future of his party looks “awesome.” That seems to be the Internet Party’s buzzword, if its social media posts are any indication. 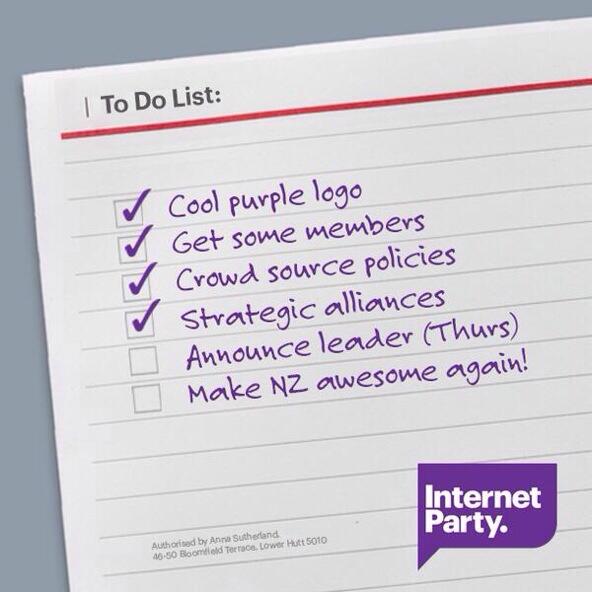 Internet Party funded by Kim Dotcom has new leader @lailaharre . Her profile: "NZ's most awesome politician." Is the voting age 15 there?

The Internet Party’s passion for privacy springs from Dotcom’s own experiences with local authorities. The Government Security Communications Bureau (GCSB) of New Zealand, the country’s version of the NSA, admitted to illegally spying on Dotcom in 2012. Prime Minister John Key even apologized to him about it afterward, though this week he’s back to criticizing the Internet millionaire. “This is a very wealthy guy trying to buy a political party to stop himself being extradited,” Key said Thursday.

Should Dotcom win seats for his party in Parliament, he could conceivably nudge New Zealand lawmakers to block the United States’ extradition efforts against him. But party leader Harre says that isn’t Dotcom’s motivation for forming the group. “That is not something that has ever been discussed, and if it had been discussed, I wouldn’t be sitting here today,” she said.

Dotcom is a legal New Zealand resident but not a citizen, which means he can’t run for office himself. But he’s making sure that his name and face are all over the party’s campaign. As he tweeted this afternoon, “Do not underestimate the determination of a man with a top level domain in his name ;-)” (emoticon and all).