Sending a child to war: It’s a moment most mothers dread.

Then there’s Rima al-Jarish, the Al Qaeda–loving Saudi mom thrilled her 15-year-old son is now fighting in Syria—in the name of jihad.

“God bless,” she tweeted Sept. 13 about her son, believed to be the youngest Saudi Arabian in the conflict. “I want to announce that my son Mahad arrived in Syria. I ask Allah’s endurance for him and for us.”

Al-Jarish, a pro–Al Qaeda activist, has been most vocal on Twitter for the past few weeks, praising her son for “teasing the enemy and inciting the believers.” Both al-Jarish and her son could not be reached for comment.

Al-Jarish has gotten in trouble with the Saudi government before, arrested multiple times for supporting the release of Saudi Arabia’s Al Qaeda prisoners. And her son, Mahad Alhamly, has now joined up in Syria with the Islamic State of Iraq and the Levant, the jihadi group and Al Qaeda affiliate responsible for considerable discord among the rebels. A major reason: the group’s brutality. In some towns, Alhamly’s cohorts reportedly act as a de facto government, imposing strict Islamist law where President Bashar al-Assad’s rule no longer holds.

As many mothers across the globe upload photos of their 15 year-old’s first day at high school, al-Jarish has been posting photos of her son armed with an automatic weapon or astride a horse in jihadi garb. She is unabashedly proud, a sentiment that has not gone uncensured on Twitter. Under the hashtag #نفير_معاذ_الهاملي, or #SpeakOutForMahadAlhamly, a thousands of Saudis have lashed out against her, calling for her other children to be taken away from her and asking that she be given mandatory therapy.

“Why Mahad’s Mother why? Why do you send this kid to die? What happiness will you feel when your son dies?”

“Sending him to die in a secterian political war is not the solution.” 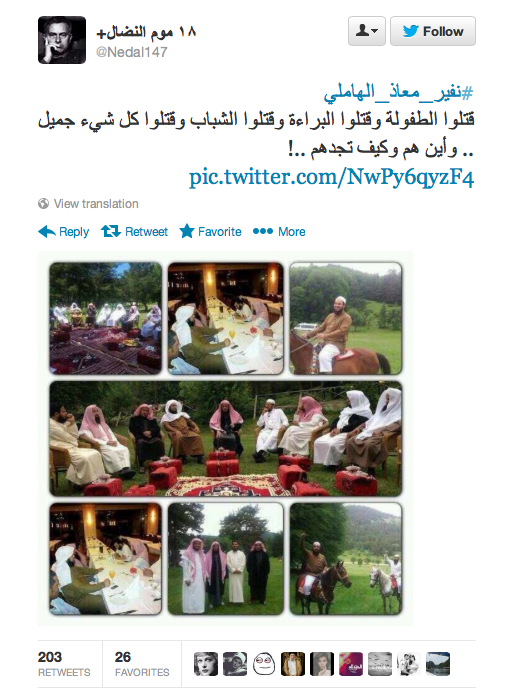 “They killed childhood. Youth and innocence were killed, everything beautiful was killed … Where are they now? Where do we find them?!”

Others, speaking in English, were more harsh.

I'm seriously holding the urge to bomb myself right now from the amount of brainwashed jihadists in this trend, too soon? #نفير_معاذ_الهاملي 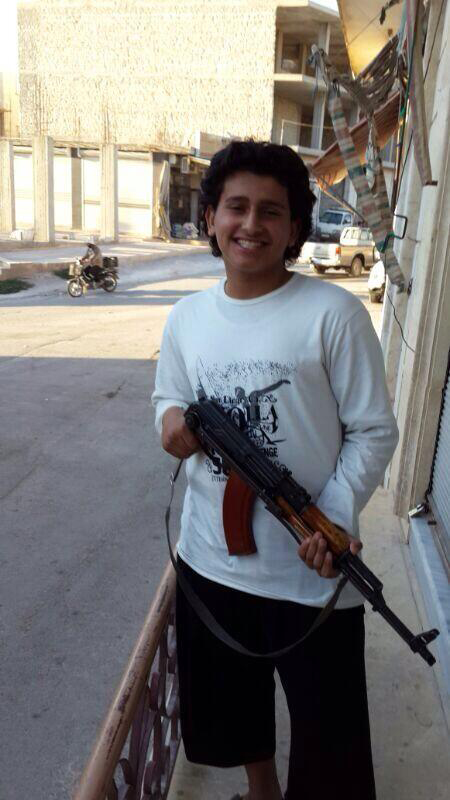 In some cases, however, her tweets incited praise.

“Allah will lead his way and fulfill his goals. I praise you for this honor, sister. Allah will reward you.”

“You die only once, and the mother chose for her son the greatest death. She chose for him the true calling.”

Al-Jarish says her son was encouraged to join the Islamist fighters after visiting his father in a Saudi prison, where he was first jailed a decade ago for being a member of Al Qaeda. “He listened to the stories of the prisoners,” she told a local news source, later tweeting, “10 years and his father is still groaning under the boots of the authorities. I don’t want such destiny  for my child.”

Speaking with Vocativ over Skype, another member of the jihadi ISIL claims that while there are children with the group, they usually stay on the base and are kept from fighting until they are grown.