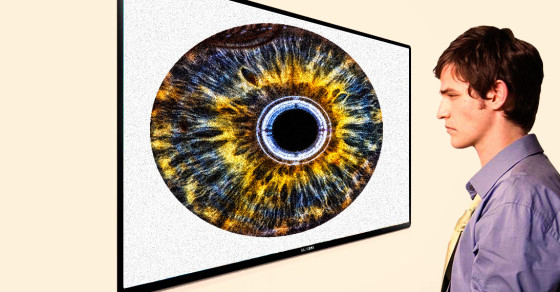 It’s A Bad Day For The Internet Of Things

There’s a viral news story going around this morning about Samsung’s Smart TV and its sinister-sounding setting that “listens” in on all your conversations.

The gist: Samsung’s newest TV has voice recognition software that allows you to speak to your TV and tell it what to do. The problem is that there’s no “trigger” word that actually initiates the voice control, so the TV ends up listening to you the entire time, like a telephone that you forgot to hang up. That’s weird in itself, but according to the company’s privacy policy, Samsung can take all that audio and send it to a third party.

Of course, this story plays into a larger cultural concern—the fear that the government and tech companies are secretly spying on us.

It’s definitely creepy, but if you’ve been following this sort of technology, this particular news story isn’t really new. It was reported back in October 2014, when New York University privacy lawyer Michael Price wrote about the same Samsung TV in a Salon piece titled, “I’m Terrified of My New TV: Why I’m Scared to Turn This Thing On—and You’d Be, Too.” Price references the same clause in Samsung’s privacy policy that initially set this story on flames. For whatever reason, that story didn’t go viral, but today’s one did.

The broader point, of course, is that the Samsung TV is just another Internet-connected device that can be manipulated to collect information about you, the user, without your knowledge and potentially without your consent.

The “Internet of things” is a silly, harmless expression that simply translates to “any device that is in some way connected to the Internet.” It’s an undeniable trend and a potentially great advancement for consumer technology: The next refrigerator you buy, for instance, will almost certainly be connected to the Internet, and will also probably include some voice recognition software to answer your questions about the weather and remind you to buy more eggs.

It’s exciting and weird to think that you’ll be talking to your fridge in the mornings, but there are obvious ways in which this sort of technology can be used for all the wrong reasons.

Even back in 2013, researchers showed how hackers armed with merely a laptop could hack into a car’s on-board Wi-Fi and kill the engine or accelerate the gas pedal. But a new report out today, titled “Tracking and Hacking,” reveals just how powerless car manufacturers seem to be against the looming threat of more sophisticated attacks. “Drivers have come to rely on these new technologies, but unfortunately the automakers haven’t done their part to protect us from cyber-attacks or privacy invasions,” says Ed Markey, the Massachusetts senator who commissioned the report, in a statement.

The broader point is that Internet-connected and voice-controlled products are proliferating everywhere, from thermostats to alarm clocks, but the encryption and security needed for these devices hasn’t necessarily caught up. In other words, you may want to think twice before chatting up your new Samsung TV, or sharing intimate details of your personal life to your brand-new Wi-Fi enabled dishwasher.