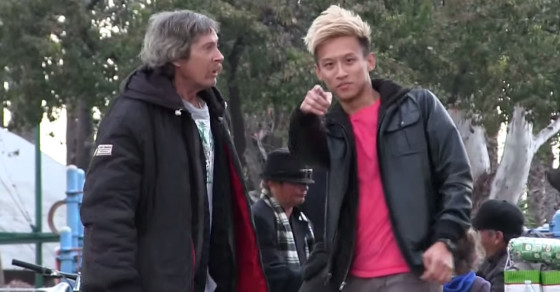 It’s been three weeks since a fundraising campaign for a generous homeless man who appeared in a viral video came to an end, netting more than $146,000 in donations from around the world. But Kenny Thomas Nickel, the man who moved millions of viewers when he used $100 to buy food for others down on their luck, has yet to see a penny of it.

Meanwhile, the YouTube prankster who made the film and started the donation page, Josh Paler Lin, continues to raise suspicion about what will happen to the money.

The Internet personality faces renewed scrutiny after a man who tracks news stories about the homeless online confronted Lin on camera to ask why he still hasn’t cut Nickel a check, despite repeated promises to do so. In the exchange, which occurred at the PlayList Live convention in Orlando, Florida, and posted to YouTube this week, a defensive Lin insists that Nickel will “receive 100 percent of the money,” but continues to dodge specific questions about when that might happen.

Asked point-blank about why he hasn’t given any updates about Nickel or the fundraiser in weeks, Lin, who appears to be intoxicated, responds: “Man, it’s been really, really crazy. …Have you ever taken care of a homeless man for 30 days?”

When pushed on the topic, the YouTube star grows increasingly agitated and eventually lunges at the interviewer, grabbing his microphone. “One word,” Lin says. “Patience.” He then walks off and joins a group of people.

“I still have many, many concerns about this video and the money raised from it,” says James Worley, the man who confronted Lin on camera and runs the Facebook page “Homeless Lives Matter.” The 45-year-old tells Vocativ that he himself is homeless and currently lives in a friend’s cargo trailer in Tampa, Florida. “How hard is it to give direct answers to a pretty straightforward question?”

Though it has now received more than 34 million views on YouTube, doubts have plagued the video and its creator since it first appeared just days before Christmas.

In an interview with Vocativ in December, Lin avoided answering specific questions about the fundraiser he had set up for Nickel. Later, an eyewitness told our publication that he had watched Lin and Nickel stage a key scene in the video, casting doubt about the creator’s original claim that it had not been scripted. Since then, others have found additional inconsistencies with the video and Lin’s narrative.