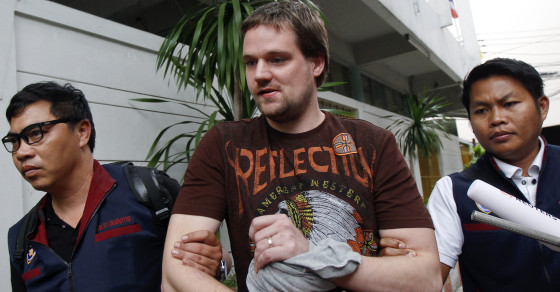 Did Hollywood Launch A Manhunt For Pirate Bay’s Fugitive Founder?
By Eric Markowitz

Did Hollywood Launch A Manhunt For Pirate Bay’s Fugitive Founder? 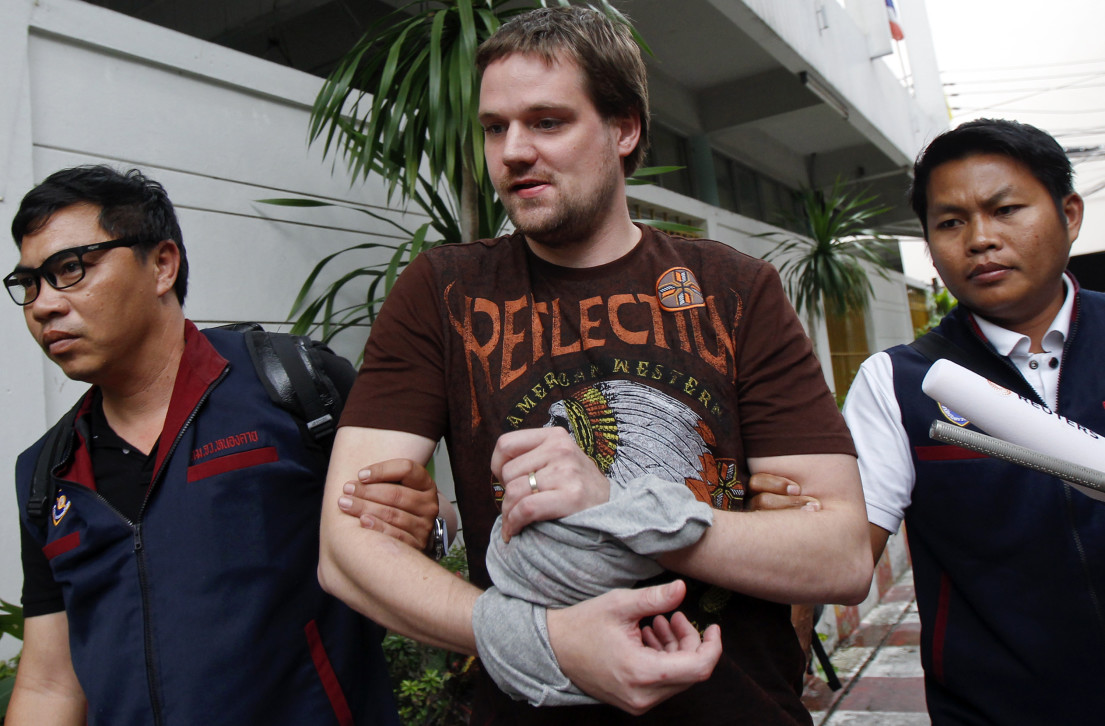 Fredrik Neij, a 36-year-old Swede, was crossing from Laos into Thailand earlier this week when the border police recognized his picture and arrested him. You may have never heard of Neij (who goes by “TiAmo” online), but there’s a good chance you’ve heard of the site he co-founded: The Pirate Bay, the world’s most notorious file-sharing website.

Since it was founded in 2003, The Pirate Bay has become legendary—millions of people have used it to download pirated content. Despite multiple attempts to shut it down, the site prevails, and ranks among the top 50 sites in America. While Neij was still running the site, he was allegedly making a fortune from ads that ran on it.

Immigration police announce Neji’s arrest and parade him in front of the media.

A Swedish court found Neij and his co-founders guilty in 2010 of “assisting in making copyright content available.” Since then, there’s been an Interpol warrant for his arrest.

But even though Neij was sentenced to one year in prison and fined millions of dollars, he was sentenced in absentia: Neij was living in Laos with his wife and son, and he refused to return to Sweden to serve out his prison sentence. “I can serve a prison sentence,” he told a documentary filmmaker in 2010. “But why do it if I don’t have to?”

Not much is known about Neij’s life on the lam, but he apparently made over two dozen trips into Thailand over the last couple of years. According to TorrentFreak, Neij had a house on the island of Phuket, and had 5 million baht ($153,000) in a bank account.

Neij’s two co-founders have already been arrested: Peter Sunde is currently sitting in a jail cell in Sweden, while Gottfrid Svartholm is in prison in Denmark.

Interestingly, it may be the Motion Picture Association of America—a group most people simply associate with movie ratings—that’s actually behind Neij’s capture. For years, the MPAA and The Pirate Bay have been open enemies. After all, it was the MPAA’s criminal complaint, filed in Swedish court in 2004, that led to Pirate Bay’s downfall and the Swedish court issuing a warrant for Neij’s arrest.

Fredrik Neij, right, and Peter Sunde, two of the co-founders of The Pirate Bay, arrive in court in Stockholm in 2010.

It’s been the MPAA’s long-standing position that Hollywood studios have been losing millions of dollars per year because of piracy. Shutting down The Pirate Bay (and getting its founders arrested) was a major coup for Hollywood.

When news of Neij’s arrest came earlier this week, there was one curious line from local Thai media reports: that “U.S. movie companies hired a law firm to track down Neij.”

The MPAA is the only “movie company” that would care enough to track down Neij. Still, it’s strange to think that the MPAA is hiring overseas law firms to track down fugitives. But it’s clear that the members are trying to set a precedent: If you operate a site that enables free downloads, we’re going to come after you.

I asked the MPAA directly whether the association had hired the Thai law firm to track down Neij. A spokesperson declined to comment.

Thai police officers escort Hans Fredrik Lennart Neij, co-founder of the Swedish file-sharing website The Pirate Bay, as he arrives this week at the Immigration Detention Center in Bangkok.

As recently as September, the MPAA has been crusading against sites that offer pirated content. “While the legitimate digital marketplace for creative content is flourishing there have never been more ways to watch film and television online unfortunately, online content theft poses a significant and ever-evolving challenge,” they wrote in a Sept. 26 letter urging the U.S. government to take these sites more seriously.

The MPAA then goes on to call the facilitators of sites like these “content thieves” who are “taking advantage of a wide constellation of easy-to-use, consumer-friendly online technologies.” In 2013, the MPAA teamed with police in Dallas to arrest three high-profile movie pirates. And in April 2014, the group filed a massive lawsuit against Kim Dotcom, the founder of Megaupload.

Neij, for his part, is now being questioned by investigators in Bangkok, and will be extradited to Sweden later this month. According to Reuters, “Neij told reporters in Bangkok that his arrest was ‘expected’ but did not offer any further explanation.”