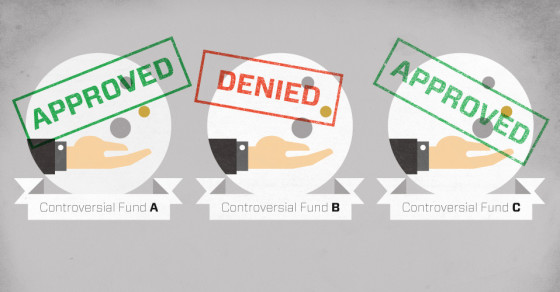 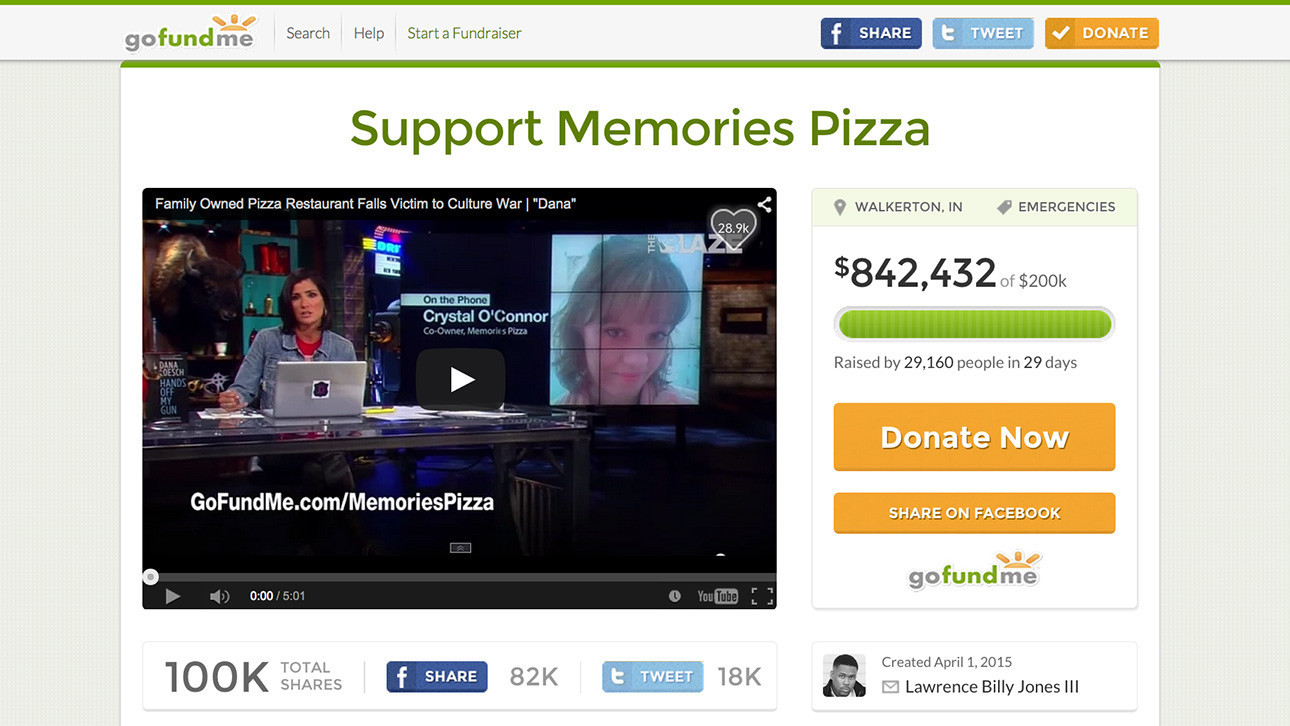 The popular crowdfunding platform GoFundMe allows people to raise money for some white police officers who have shot and killed unarmed black men—but not others. It is also picky when it comes to choosing which businesses it will permit to drum up cash via its site.

Just last week, the San Diego-based company shut down a fundraising page for Sweet Cakes by Melissa, the Oregon bakery that drew headlines for refusing to make a wedding cake for a lesbian couple. Less than 48 hours later, it yanked the crowdfunding campaign for Washington state’s Arlene’s Flowers, another Christian-owned business opposed to LGBT weddings for religious reasons. And earlier in April, the website rejected efforts to raise money for Michael Slager, the white South Carolina police officer charged with fatally shooting Walter Scott, an unarmed black man.

The swift and sudden purge of controversial campaigns raised a few eyebrows, largely because the website allowed nearly identical efforts in the past. A few weeks before the site pulled the plug on Sweet Cakes and Arlene’s Flowers, donors on GoFundMe were able to raise more than $800,000 for Indiana’s Memories Pizza, which drew intense criticism for saying it would refuse to cater a gay wedding during the height of the state’s religious freedom laws debate. And in September, supporters of Darren Wilson, the white Ferguson, Mo., officer who shot and killed Michael Brown, an unarmed black man, used the website to raise nearly $500,000 for the cop and his family. Though Wilson’s campaign prompted outrage, GoFundMe went to great lengths to defend it, offering a lengthy rebuttal to critics.

This religious-freedom fundraiser is A-OK, according to GoFundMe...

“GoFundMe is an open social media platform where opposing ideas and viewpoints exist,” the company wrote on its website. “If GoFundMe were to remove campaigns because they are unpopular, it would set a dangerous precedent moving forward for all users.”

So what’s different about the three campaigns the company shut down this month? A company spokeswoman told Vocativ in an email the shuttered projects had supported causes that violated GoFundMe’s terms of service. This is what she wrote: “‘Campaigns in defense of formal charges of heinous crimes'” are prohibited by our terms.” She added that the company also does not permit campaigns that support causes that have violated state or local law.

Given this rationale, things make a little more sense. Slager, the officer who shot Walter Scott, faces murder charges in South Carolina. Sweet Cakes and Arlene’s Flowers were found by judges in Oregon and Washington to have violated their states’ anti-discrimination laws. Meanwhile, Wilson was never charged with a crime. And Memories Pizza did not violate Indiana’s laws.

However, the spokeswoman’s description of GoFundMe’s terms in her written statement does not jibe with the terms on the company’s website. This is how the actual term is written on the site, under the section of prohibited activity: “Campaigns in defense of formal charges or claims of heinous crimes, violent, hateful, sexual or discriminatory acts.” (Emphasis added.) Additionally, there is no mention of following state and local laws listed on GoFundMe’s terms of service.

...but not this religious-freedom fundraiser.

GoFundMe only communicates with the press through email and has yet to offer a clarification.

If anything, the difference shows just how much an Internet startup like GoFundMe flies by the seat of its pants. In five years, the company claims to have crowdfunded more than $900 million from 10 million people. And thousands of people these days have turned to it to raise money for just about anything and everything.

It also remains unclear how GoFundMe can actually monitor or ensure that the tens of thousands of crowdfunding projects hosted on its site comply with the company’s terms of service. GoFundMe’s spokeswoman told us in her email that the site has “many safeguards and processes in place to review campaigns.” She also indicated that campaigns will undergo additional scrutiny “as they are brought to our attention by visitors and additional information is discovered.”

But in a 10-minute rudimentary search on GoFundMe on Thursday, we found plenty of campaigns that violate the company’s terms of service. We turned up a campaign in Europe that’s already raised $1,500 for Pegida, Germany’s anti-Islamic, neo-fascist movement, as well as one supporting the defense fund of an Idaho man facing felony charges and five years in prison. A New Jersey deli owner is raising money to save his business after he lost customers for hanging up a sign in his storefront that read “Celebrate your white heritage in March, White History Month.” He’s so far banked $1,900.

Which is why it’s hard to wrap your head around the company’s official statements. “Any campaign that violates GoFundMe’s terms will be removed,” the spokeswoman also told Vocativ. “These are never arbitrary decisions.”