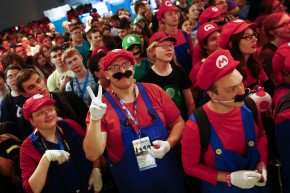 More Female Speakers Than Ever At Biggest Gaming Conference

Women are slowly being invited into the male-dominated culture of game developers. After a year where gamergate dominated the conversation–one of those awful Internet scandals that only seemed to worsen with time–progress is finally being made in the gaming world.

On Monday, about 24,000 people will attend the Game Developers Conference (GDC) in San Francisco, billed as the “world’s largest and longest-running professionals-only game industry.” How many women are speaking there? More than ever.

Vocativ scraped GDC’s speaker lists for the last five years. The 2015 edition will have the highest percentage of female speakers than any other year. There will be 184 women compared to 744 men–about 20 percent of the total speaker pool.

Men vs Women on the GDC Speakers Roster

One out of five is obviously still nothing to boast about, but the percentage of women speaking does appear to be rising. And while there are a handful of sessions on gender diversity (read: female game developers invited to an industry conference to talk about female gamers in the industry), most of the female participation is, as it should be, in substantive sessions where gender isn’t an issue.

Percentage of Women Among GDC Speakers

In August, GDC’s general manger, Meggan Scavio, issued a statement that called for more diversity at the conference. “GDC is intended to be a safe, respectful place where developers can feel comfortable sharing knowledge with their peers across the industry, regardless of gender, ethnicity, sexual orientation, disability or religion, and strictly enforces its Code Of Conduct,” she wrote. Boss level statement, Meggan.