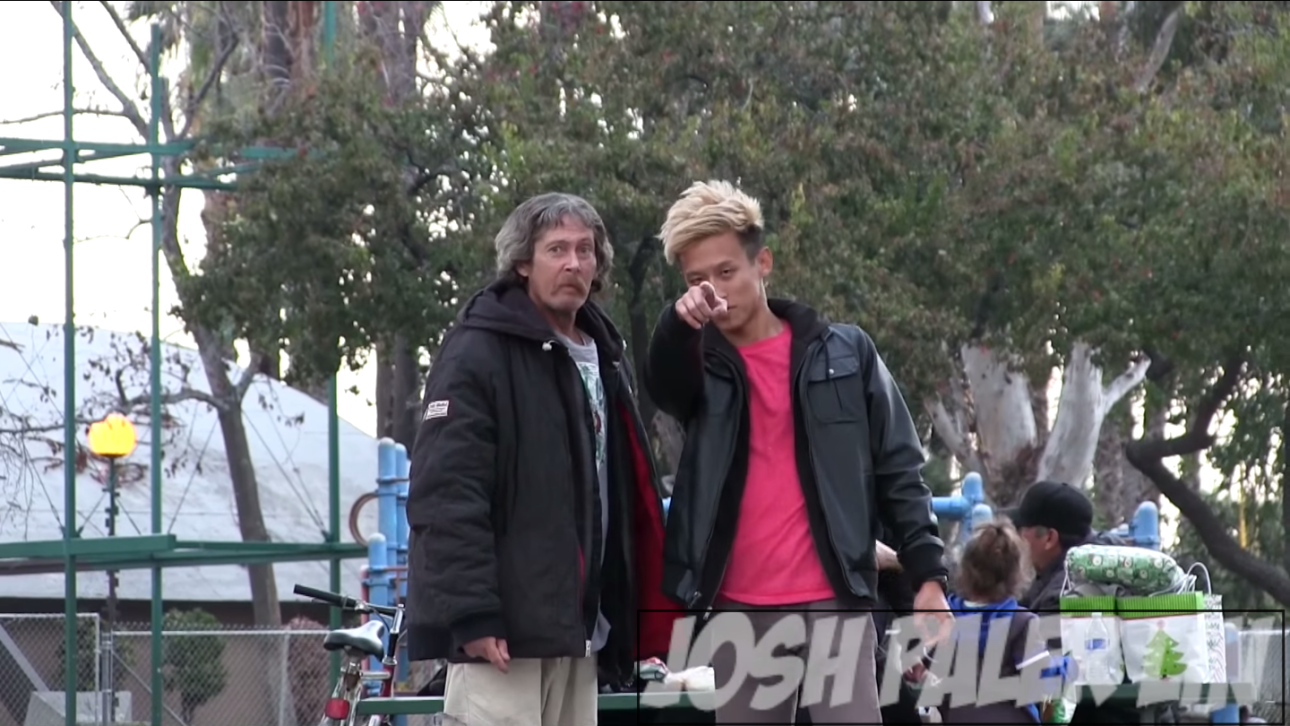 An Internet prankster under fire for possibly staging a viral video in which he helps a generous homeless man is now being accused of trying to cover his tracks during what’s become the video’s most controversial scene.

In the video, released days before Christmas, YouTube star Josh Paler Lin purports to give a homeless man named Thomas $100. He then secretly follows Thomas around Anaheim, California, to see how he spends it, expecting the homeless man to buy booze. Thomas walks into a liquor store. But instead of alcohol, he purchases food, which he later hands out to people who are also down on their luck. Apparently moved by the selfless act, Lin approaches Thomas again and tells him he’s being filmed.

The video, which continues to warm hearts around the world, has racked up more than 31 million views since Dec. 22. Following its success, Lin launched an Indiegogo fundraising campaign to “help Thomas get a fresh start” and netted more $139,000 in donations from a well-meaning public.

But mounting doubts about the film’s authenticity are plaguing Lin. Skeptics claim to have found multiple holes or inconsistencies in the video that suggest it is fake. Meanwhile, an eyewitness told Vocativ last week that there’s no way Thomas could have been secretly filmed—because he and Lin arrived at the liquor store in the same car.

“The whole thing is bullshit,” said Taugan Tan Kadalim, who claims that on Dec. 20 he was outside the Euclid Liquor & Market, where the video’s pivotal scene is set. “Thomas knew he was being followed.”

Lin, whose popular gags involving sex in public bathrooms and the mafia have earned him more than 800,000 YouTube subscribers, denied Kadalim’s claims and insists that not a single scene in the Thomas video was staged or scripted.

But now, in a new video, the cashier of Euclid Liquor & Market seems to confirm Kadalim’s account. Speaking with Cody Roeder, a vocal Lin critic, the cashier says that Lin indeed entered the store right around the same time Thomas did. Lin used the store’s ATM to withdraw money. Thomas walked in shortly afterward.

In a strange twist, the clerk also says Lin returned to the liquor store after Kadalim gave his interview to Vocativ. This time, the YouTube prankster tried to convince the clerk that he had never set foot inside the liquor store.

“He said, ‘You had never seen me before except for today,'” the clerk, who is not named, tells Roeder. “I said, ‘Yes I did. You were in my store. You got money from my ATM.'” The clerk then says Lin tried to argue with him and force him to say he was mistaken, so he kicked Lin out of the liquor store.

Roeder tells Vocativ he’ll continue to work on discrediting Lin’s video until the Internet prankster comes clean. “I, like so many others, want Josh to apologize, to admit he was wrong for doing this,” Roeder says. “Basically I’m not going to stop until he says he faked this video.”