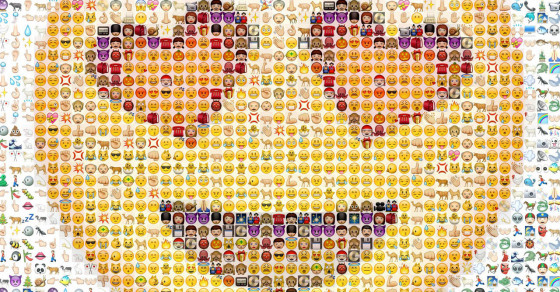 Emojis Are Ready for Their Moment
By Emily Levy

Emojis Are Ready for Their Moment 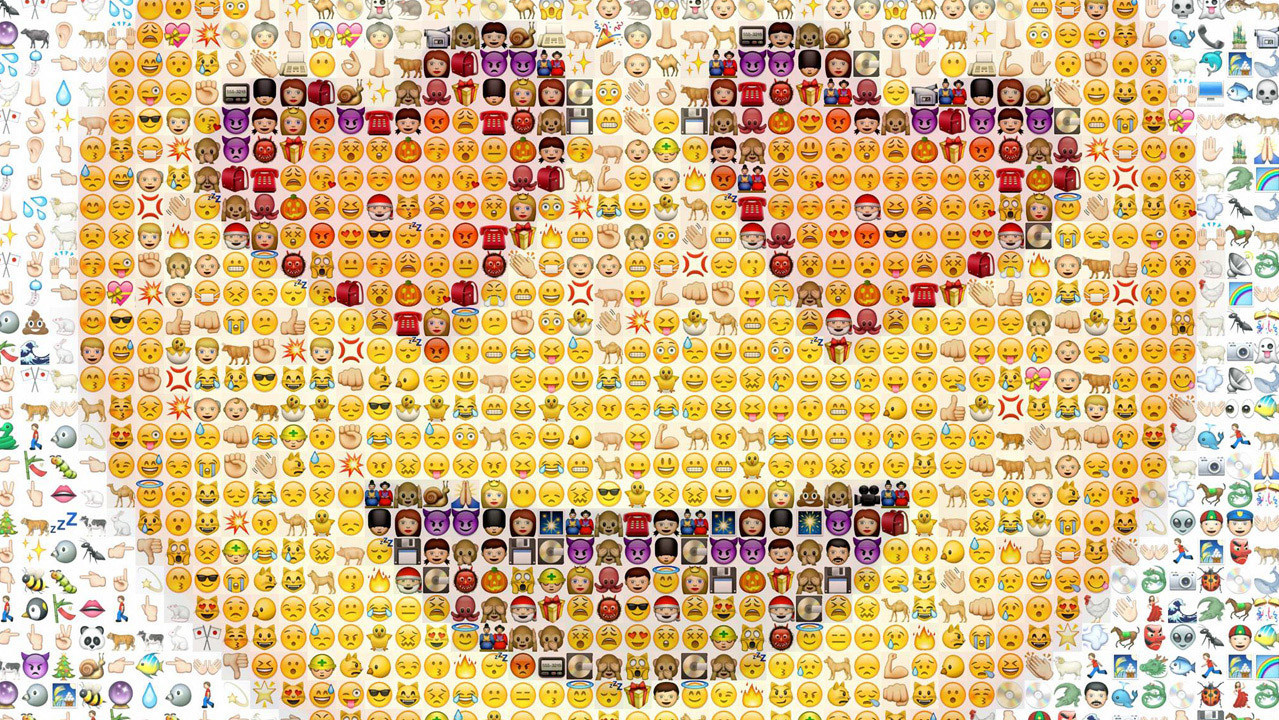 At Samsung Accelerator’s midtown Manhattan office, Matthew Rothenberg stares into his computer screen at Emojitracker, an online tool he developed last July that visualizes real-time tracking of emojis used on Twitter. The site, which he calls an experiment, is a seizure-inducing emoji leader board fueled by open-source Twitter information. It’s also a scary reflection of our reliance on smileys and salsa-dancing pictographs. “The volume is completely overwhelming to me,” he says, reflecting on his nearly year-old platform. “It’s hypnotic.”

Rothenberg doesn’t store data or track trends on which emojis are perpetually the most popular. (At publishing time, there were nearly 4 billion tweets containing emojis posted since last July, and the most popular symbol was the heart emoji.) Nor does Bradley Griffith, who just this month launched Silicon Feelings, a related tool that tracks emoji use in tweets by volume and location. But both acknowledge that maybe they should start keeping tabs on which emojis are used, where and why, and actually do something with their findings. Because with a new set of emojis set to debut this summer, there may be real value in using the symbols, like words or numbers, as pieces of data.

That the future of data-driven projects—campaigns, advertisements, cultural predictions—might lie in emojis is a novel idea. Mostly because translating the existing 842 small, cutesy glyphs into something profitable and influential doesn’t (at least, at first look) sound like a productive venture. But emojis, born in Japan in the late 1990s to advance emoticons—strings of punctuation that denote facial expression and body positions—have slowly proliferated into every social platform and mobile device (Google updated its emoji support system on Android in November), and there’s a lot of material to comb through.

“A lot of people use big data to do sentiment analysis with tweets,” says S. Shyam Sundar, co-director of Penn State’s Media Research Laboratory. “They determine the mood of the public in a region or domain about a particular topic. Tracking emojis can be a similarly descriptive tool for figuring out how people in general are feeling.”

There’s something innately captivating about them. While Rothenberg himself acknowledges that the tool he’s created doesn’t yet add enormous value as a cultural predictor, he knows there’s certainly demand for one: “The most gratifying reactions are from the people who say, ‘This is completely pointless. I’ve been staring at it all day,'” he says, laughing.

A handful of companies, including Yelp and Facebook, already use emojis to track users’ movements online. In early April, Yelp adopted emojis as a form of search keyword, allowing customers to search for food (like pizza) and services (like haircuts) in their area with emojis instead of words. There was good reason for this: “Emojis can be extremely useful for tech companies when it comes to labeling and collecting data, because they are easier for machines to interpret than informal, everyday language,” wrote Slate’s Alison Griswold in a story on Yelp’s emoji adoption. “Machines are notoriously bad at picking up tone, but emoticons, photo tags, hashtags and the like create categories computers can understand.”

In what Slate’s Will Oremus calls a “fiendish plot,” Facebook adopted emojis in April of last year to—at least on the surface—motivate users to share their feelings and preferences in picture-based status updates. But what lies behind Facebook’s seemingly innocuous update, Oremus and others claim, is its desire to improve advertising on the site. By giving its users preset status updates in the form of emojis (emotions like “feeling blessed” with the “Folded Hands” emoji), Facebook can hand over to its advertisers more refined, categorized information on what Facebook frequenters feel and think. “You structure data for Facebook,” TechCrunch’s Josh Constine says to people who use emojis on Facebook.

Emojis pack in a range of emotions, making them good, data-like fodder for advertisers. They’re also universally comprehensible; the pictographs are colorful, the smileys reflecting varying degrees of satisfaction. They allow for a new modality, Penn State’s Sundar explains, one that sits between text and the emoticon. “As we move increasingly towards short-hand and text communications to the point of replacing social contact over the phone or face-to-face, emojis can be quite useful as visual icons of the emotionality of the other person with whom we’re interacting,” says Sundar. “It’s more human, if you will.”

But which feelings, exactly, does an individual emoji imply? And in what context? Interpretation certainly presents a problem when it comes to analyzing emojis in a wider scope. Griffith, for his part, first set out to store the data he collected as part of Silicon Feelings, hoping to map our use of emojis that reflect positive and negative emotions both regionally and chronologically. He soon realized that parsing the data he gathered on our emoji use wasn’t so easy: “As I went about mapping out these interpretations of emoji, I quickly realized that any attempt would leave the result completely entrenched in my own interpretation of what are effectively ever changing symbols,” he says in an email.

Perhaps the best example of how emojis can allow a multitude of interpretations is their unusual names. Emojis have official titles provided by the International Organization for Standardization via script from the Unicode Consortium, the San Francisco-based group that’s written standard language for emojis that render correctly on all platforms, including Google, iOS and OS X, since 2010. Over at Unicode, the pictographs are given titles, but a Unicode rep explains that Unicode names are “treated for most purposes like arbitrary, unique identifier strings.” And that’s sort of besides the point, as our pet names and personal perceptions usually trump these formal monikers in everyday use—a sign that emojis aren’t necessarily an indicator of universal feeling. “Everyone feels the same level of cultural ownership,” says Rothenberg of the symbols.

Described in full on Emojipedia, a cross between encyclopedia and dictionary for emojis, the formal names aren’t always as intuitive as the symbols suggest. The blushing emoji, for example, is called the “White Smiling Face.” The smiley with its tongue out is known as the “Face Savoring Delicious Food.” Then, there’s the “Information Desk Person”—the woman clad in a pink sweater with her hand flexed and raised to the right. “There’s something about the ‘Information Desk Person,'” says Rothenberg. “She has an attitude to her. She’s the ‘whatever’ girl.”

Yet our ability to use emojis as data points hinges on the symbols becoming more numerous and more culturally specific, giving each individual symbol a more defined meaning. Unicode is set to introduce its next round of emojis (Unicode 7.0) by July, including glyphs such as “Wind Blowing Face,” “Fork and Knife with Plate” and “Beach With Umbrella,” according to Emojipedia. And Apple has already vowed to diversify its emoji collection in a racial context following a recent DoSomething petition and pressure from celebrities such as Miley Cyrus and Tahj Mowry. (As Ars Technica’s Andrew Cunningham notes, however, this process usually takes a long time, since Apple and Google can only apply pressure to update the Unicode standard, and Unicode steers the process.)

Of course, not everyone is as concerned about racial diversity on their keyboards as Miley and her cohort, and as Rothenberg points out, everyone wants something a bit different when it comes to their pictographs. “The middle finger has to be the most requested [on the site], and is already planned for release this year,” says Jeremy Burge, founder of Emojipedia, in an email to Vocativ. He adds: “That will make a lot of people happy! Personally, I would like to see a more subtle laughter emoji. The tears of joy emoji is great, but might be a bit much for some situations.”

Emoji evolution will be integral to the symbols’ value in sentiment analysis moving forward. And while a comprehensive history of the emoji was published last year on the Verge, titled “How Emoji Conquered the World,” Sundar believes “conquered”—in the past tense and to suggest a final victory—isn’t the right word for emojis. “This is a new language and a new grammar,” he says. “And I think it’s still new. We’ll keep inventing emojis. I think it’s improper to say the language has been adopted.”