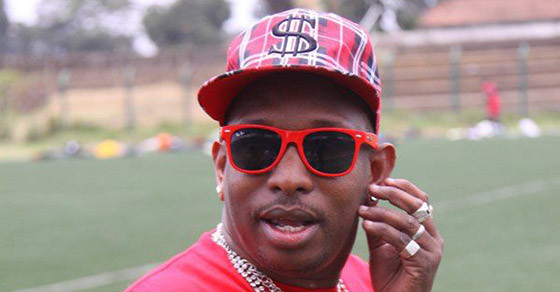 It’s rare to come across a tweet from a senator demanding that his country’s president give him “all the weed.” That’s generally a request better made in private. But it became a public matter yesterday when the Kenyan wing of hacker group Anonymous drew attention to the gem below, taken from the official yet unverified Twitter account of Kenyan Senator Mike Sonko:

Hey @UKenyatta give me the weed

Sonko is a controversial character in Kenya, a bling-loving politician prone to weird publicity stunts and odd hairstyles. (Vocativ previously called him “Kenya’s Kanye.“) But he denies the marijuana demands. He wrote on Facebook yesterday that his Twitter account had been hacked:

Sonko’s Twitter feed as of Monday morning still contained some curious remarks—presumably the work of Anonymous—that target a Kenyan regime long viewed as corrupt. There was this crack at Joseph Ole Lenku, the secretary of Kenyan President Uhuru Kenyatta’s cabinet:

That was followed by this swipe at David Kimaiyo, the inspector general of the Kenya police:

Julius Karangi, the chief of the Kenya Defence Forces, also was the subject of Anonymous’ wrath:

This is not the first time Anonymous Kenya successfully hacked the account of a Kenyan politician. The group hacked several government websites this July as part of its mission to expose corruption. Transparency International ranks Kenya among the most corrupt countries in the world, at a position of 139 out of 176, and a presidential campaign launched last year to report bribes in the country has largely been ignored, apparently because few believe anything will come of it.