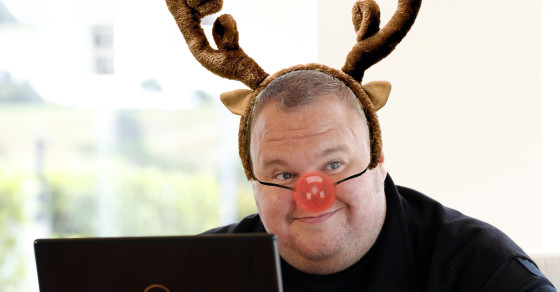 How Kim Dotcom Saved Christmas For Millions of Gamers

Kim Dotcom smiles during an interview with Reuters in Auckland, New Zealand, on Jan. 19, 2013.

For the thousands of kids (and grown-ass men) that plugged in their brand-new PlayStations and Xbox’s on Christmas morning, they were in for a serious letdown.

Lizard Squad—a notorious group of hackers Vocativ profiled in October—had launched a massive attack against the Sony PlayStation and Xbox Live networks, and all systems were down. The two networks have a combined 150 million users, and you can imagine people were pretty damn pissed.

Fuck the Lizard Squad. They're all just annoying virgins.

I wonder how many people tried to return their new console thinking it was broken.

The denial of service attack (aka DDoS) took all systems down for over 24 hours—until a savior emerged: Kim Dotcom.

For those familiar with Lizard Squad, this shouldn’t be too surprising. The group launched a similar attack on the gaming networks over the summer, and even threatened to do the same thing on Christmas morning. According to WinBeta, which interviewed one of the anonymous hackers in the Lizard Squad group, the point of the hack was really just to mess with Sony and Microsoft. “The group is attempting to stress the point of computer security, while also getting a few ‘laughs,'” WinBeta notes.

As Sony and Microsoft struggled unsuccessfully to get their networks back up, Kim Dotcom swooped in.

Dotcom, the infamous Internet entrepreneur and founder of cloud storage site Mega, happens to be a prolific gamer himself. So he offered the hacking collective 3,000 premium vouchers for his site if they stopped the attack. Each premium voucher is worth $99, and gives the user additional storage space and extra bandwidth. Dotcom recently told the world that he was broke, for whatever that’s worth.

Hi @LizardMafia, I want to play #Destiny on XBOX Live. I'll give your entire crew Mega lifetime premium vouchers if you let us play. Cool?

Amazingly, it worked. The hackers apparently took the deal and stopped the attacks.

Thanks @KimDotcom for the vouchers--you're the reason we stopped the attacks. @MegaPrivacy is an awesome service.

As of Friday morning, Xbox Live is back up and running, though the PlayStation network is still offline.

Clearly, Kim Dotcom has—in the most bizarre fashion imaginable—emerged a hero from all of this.

Kim Dotcom is the peoples hero. Thanks for saving Christmas!

This whole hacking situation seems like one big scheme to make Kim dotcom look like a hero. Straight up movie style.

As for Dotcom, he’s just happy to be playing video games again.

Going to play some #Destiny on Xbox Live today ;-) Phew!