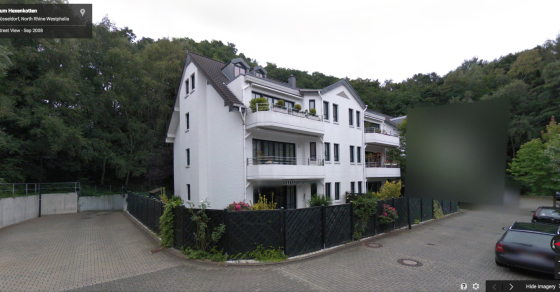 The home of Andreas Lubitz, the co-pilot who crashed the Germanwings jet last week, is now blurred out on Google Maps.

In the wake of the crash, the media has been trying to learn as much as possible about Lubitz, who investigators say intentionally flew the plane into the ground. To avoid this attention, some of Lubitz’s relatives have taken down their Facebook pages. Lubitz reportedly lived with his girlfriend at 19 Zum Hexenkotten in North Rhine-Westphalia in western Germany. When you plug the address into Google Maps, it is entirely blurred out. It’s not clear when over the past week Google fuzzed it out. We emailed Google for more detail and will update the story if we hear back.

Both individuals and governments can request that Google Maps images be blurred because of privacy concerns. Germans, however, have a contentious history with the search giant over privacy. In 2010, after goverment officials expressed concerns, Google offered Germans the opportunity to opt out of its Maps feature, saying that the company was “obeying local privacy laws.” At the time about 250,000 Germans took Google up on the offer.

There have been other examples of Google Maps altering and removing images. For instance, in 2013 a California father asked to have a satellite image removed that showed the body of his murdered 14-year-old son, and Google obliged. There are also a number of government facilities blurred out, such as the Ramstein Air Force Base in Germany and the Reims Airbase in France.

Above, the neighboring house, with Lubitz’s home (right) blurred.