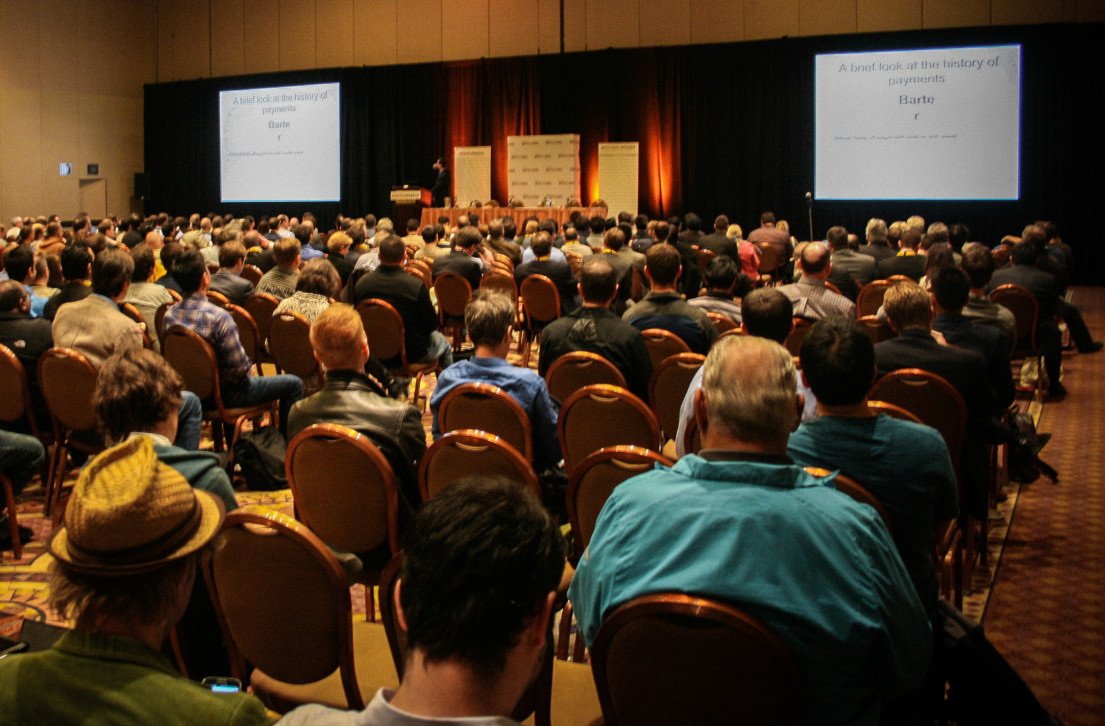 It’s 10 a.m. and I have come to Sin City in search of the Libertarian fantasy.

I’m here for the two-day Inside Bitcoins conference—at 400 people, it’s billed as the largest Bitcoin event ever—held in room 316 of the sprawling and mostly beige but absurdly clean MGM Grand conference center in Las Vegas.

From this view, it looks like a gathering of dentists or tile manufacturers or any of the other groups that hold their meetings in Vegas. (Vocativ/Eric Markowitz)

At this point, you’re probably familiar with the digital currency. It’s a decentralized, completely virtual payment system created by a man (or maybe more than one) whom Bitcoiners call Satoshi Nakamoto. You’ve also probably heard that its value has surged in recent months—some 6,000 percent since the beginning of 2013. (Earlier today, when I wrote this, one Bitcoin was trading north of $900.) The currency has made many, many Bitcoin millionaires, like this guy. And perhaps not surprisingly, there’s now even a growing array of Bitcoins frauds.

But for all the recent speculation on Bitcoin—and its volatile pendulum swings in value—one question remains.

Who is Bitcoin? I’m here to answer that question.

Four years ago, when Bitcoin was first introduced, it was unthinkable that it would have its very own conference, let alone a conference on this scale. Down the hall, the International Association of Fire Fighters is holding its annual instructor development conference, a many-thousand-person event with burning topics like “Youth Fire Settings.”

(“What the fuck is Bitcoin?” I imagine every single one of them asking as they wander by the registration booth.)

Compared to the mustachioed firemen, the Bitcoin crew is a decidedly younger conference audience. Most of the attendees are dressed in khakis, jeans and button-downs. Some wear Bitcoin T-shirts, others wear plaid. So far, I have counted four men wearing non-ironic fedoras and one man sporting a very ironic walking cane. A few wear those disgusting shoes that reveal each toe. I spot a large, burly man in a pink tutu, though I have yet to confirm which conference he is here for.

The directional signs are printed on poster board, and there is an unlimited supply of bland conference coffee, served by a small army of waiters. So far, I’ve counted about 12 women attendees.

In some ways, this is just your average tech conference. People skulk around, somewhat awkwardly, introducing themselves. Business cards are exchanged. Hands are shaken. We might as well be at the Medical Supply Conference one floor down.

But in other ways—you know, the fact that we’re earnestly discussing replacing the U.S. dollar with a virtual cryptocurrency made by a ghost named Satoshi Nakamoto—this shit’s a little bit weird. But that’s cool. I’m embracing it.

Tonight I plan on heading out in rented limos to the Inside Bitcoins secret after-party, where I’m told everything can be purchased in Bitcoin. Until then, wish me luck: I have entered the Bitcoin vortex.