My Night Out With Bitcoin Millionaire and Proud Stoner Charlie Shrem 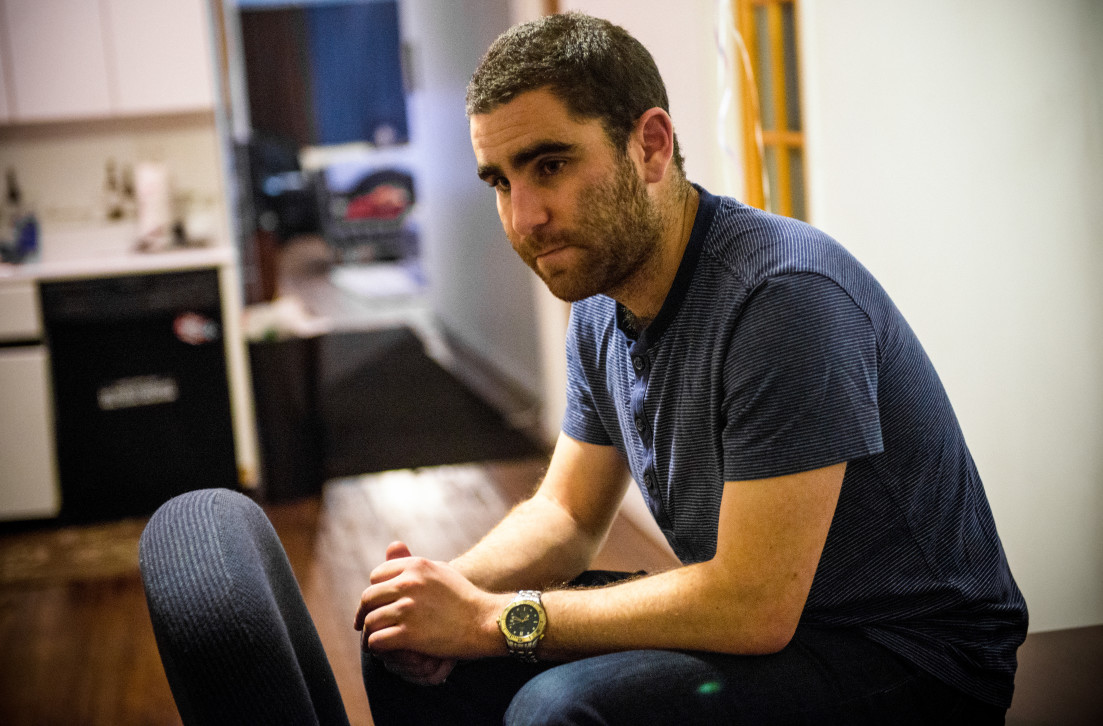 Update: One month after Vocativ published this profile of Charlie Shrem, the young entrepreneur was arrested. The DEA and FBI charged that Shrem and an accomplice laundered $1 million worth of bitcoins into Silk Road, the notorious online drug trafficking website.  In December 2014, Shrem was sentenced to two years in federal prison.

The first thing I notice when I walk into Charlie Shrem’s sprawling New York apartment is the musky smell of booze and weed. He shares the five-bedroom apartment with four roommates, and two of them are sitting on the couch. “Sup,” one of them says. I count at least two bongs.

Both big-screen TVs are on, and one of them is playing Jeopardy. On the floor is a book-marked copy of the The Secret Addiction: Overcoming Your Marijuana Dependency.

“I won’t hire you unless I drink with you or smoke weed with you—that’s a 100 percent fact,” Shrem tells me.

The 24-year-old Shrem is Bitcoin royalty, in large part because of his early bets on the virtual currency, and I was eager to spend some time with him. We had met up an hour earlier, at the Midtown Manhattan bar he owns, EVR, which is just one flight down from his apartment.

When I walked up to him, Shrem was standing outside EVR smoking a cigarette. “Cancer sticks,” he muttered as he flicked the cigarette into the street and grabbed my hand. Shrem led me through EVR’s absurdly large oak doors, high-fiving the bouncer and fist-bumping a busboy on the way in. He collapsed into a leather couch in the back of a bar, looking like a young, Jewish Tony Montana.

Courtney, Shrem’s perky blond girlfriend and a part-time bartender at EVR (pronounced “Ever”), brought me a vodka tonic. Shrem ordered a Stella.

Back in 2011, Shrem purchased “many thousands” of Bitcoins when they were just a few cents a piece. Today, they’re trading at $1,130. On paper, he’s likely worth millions, though, Shrem says, “No Bitcoiner will tell you how many Bitcoins they have.”

The 5-foot-5 Shrem, a woolly black beard covering most of his face, now spends his days and nights trying to wheel and deal, often at EVR. Shrem says that every time the price of the virtual currency goes up by 20 percent (it’s gone up more than 6,000 percent over the past year), he cashes out “a bit.” In addition to EVR, Shrem is something of a Bitcoin evangelist, traveling the world and getting paid to speak at Bitcoin conferences once a month. He’s headed to Argentina the next day, he tells me.

Even before Bitcoin, Shrem was always looking for a way to turn a buck into two. He grew up in suburban Brooklyn not far from where The Godfather was filmed. He went to Yeshiva of Flatbush, a school for Orthodox Jews known for its academic rigor, but was more interested in computers.

“I fixed people’s printers and computers,” he says. “I had a company called Epiphany Design and Production. I don’t even know where I came up with the name. I just liked the word ‘epiphany.’ What it was, was me riding on my bike to fix people’s computers. I was making a ton of money. I was charging people 50 bucks an hour, you know? It was easy money. Easy money.”

In March 2009, when Shrem was 19, he co-founded Daily Checkout, a daily-deal site—right as the daily-deal market market was taking off. It was a fairly straightforward business: Shrem would buy up wholesale electronics, or used electronics, refurbish them, and then sell them at a markup. He once hired a team of Hasidic Jews to fix old cameras. That business was acquired in 2012 by BlueSwitch, which one of Shrem’s former partners runs.

When I sat down with Shrem, I asked him to tell me his life story—and an hour later, the tales were still coming. There was the time he hacked into the University of Ghana and wrote a white paper about their security flaws. “Very nice people,” he says. In another story, Shrem hacked into a German airport and was able to access 16 of their security cameras. He also claims to have gotten into hacking fights with Pakistanis.

“I had this whole world that I was in school, I was in the Jewish community—and then I’d open up my computer and I had a following,” he says of his time as a hacker. “I had hundreds of people who idolized me. I was “Yankee” in the forums. They’d beg me to become a moderator. They wanted to talk to me. I thought eventually I’d hack into Facebook and they’d hire me.”

With Shrem, I wasn’t always sure whether we were in the realm of fact or fiction, or some hybrid of the two. But that was almost beside the point. Shrem considers himself a professional schmoozer on behalf of Bitcoin, and on that score, he delivers.

He puts his Stella down on the table, and launches into the story of how he first began buying up Bitcoin.

In 2010, “I was signed up for this cryptography mailing list. I was interested in developing and coding. Satoshi Nakamoto (the pseudonym for the guy who invented Bitcoin) sends an email, and he says ‘I’ve developed this currency, here’s the white paper.’ I think, ‘What the fuck is this guy talking about? This is stupid bullshit, it’s not going to do anything.’ I didn’t get any Bitcoins, nothing.”

Meanwhile, he had become virtual friends with Gareth Nelson, a coder he met online when he was still known as “Yankee.” In 2011, Nelson was convinced Bitcoin was going to become big, and persuaded Shrem to start a company with him.

“I said, why not? It’s a side project. Launch a website, make a few bucks. So I started buying Bitcoin very cheap, we started developing the site. I still don’t know everything about Bitcoin, but I understood we’d have a business model where money comes in, $100, we take off 2 percent, and credit the customer $98. Easy business model, how could you lose, you know? What’s the downside? All the money that we need is used to program the site, and then for float—the volume. No regulation, we don’t know anything about regulation.”

They started the company—BitInstant, which lets users move Bitcoin from one account to another—but couldn’t find any interest among funders. “I went everywhere. No one would give me a dollar. Nothing. I went to VCs. I went to banks. Eventually, my mom gave me $10,000. That’s when we really started the company. We hired Pete, a developer in New Jersey. Then we hired Rachel, a customer-service girl.”

Finally, Shrem says he got some real money—from Cameron and Tyler Winklevoss, the twins who sued Mark Zuckerberg, claiming they were the real founders of Facebook. The Winklevosses led the $1.5 million first round of funding for BitInstant’s in May. At its high point, Shrem claims BitInstant was 20 people, making $10.1 million in exchanges, and taking its 2 percent cut. Shrem also claims the company was being valued at around $40 million.

But then things got sticky. As the value of Bitcoin grew, so did regulatory scrutiny. Since August, Shrem has shut down BitInstant more than once. “If we want to exist 20 years from now, we want to make sure all of our ducks are in a row,” he says. “And right now, they’re not.”

Many Bitcoiners are fervent libertarians: They believe that because Bitcoin is a decentralized currency, the government can’t touch it. Shrem tells me he stays away from all that “libertarian stuff”—and yet his world view is pretty starkly libertarian.

Shrem, who is also the vice chairman of the Bitcoin Foundation, a nonprofit that spreads the word about Bitcoin, plans to re-launch his site in the next few weeks. In the meantime, he’s enjoying life—and his fat stockpile of Bitcoin.

“A lot of what I do is making deals, closing deals, getting people to like me. It’s impressing people. I have to take a lot of people out to clubs, buying bottles, buying dinners. BitInstant is my day job. Bitcoin is my life. I drink for free, I eat for free. It’s a good life so far.”