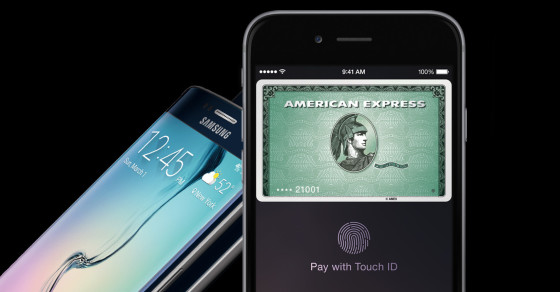 How Does Samsung Pay Stack Up Against Apple Pay?
By Sarah Kaufman

How Does Samsung Pay Stack Up Against Apple Pay?

During the public launch of its new Galaxy S6 And S6 Edge phones on Sunday, Samsung unveiled Samsung Pay—a mobile pay service that the company behind the technology claims will be instantly usable in 90 percent of all retailers. Compare that to Apple Pay, a similar service from Apple that is currently only available in three percent of retail locations.

LoopPay, the company that developed Samsung Pay, claims the service is the only one of its kind that uses the standard magnetic-stripe credit card readers attached to the majority of point-of-sale machines to make transactions. Essentially, Samsung Pay consists of a metal coil inside the phone that generates a magnetic current that most credit card machines can read. Apple Pay, on the other hand, requires check-out machines be connected to a near-field communication (NFC) unit, a technology currently available at only three percent of retail locations.

Naturally, Apple Pay has other benefits (it is owned by the most valuable company in history, after all) and much of the competition between these two services will come down to user attitudes toward the two companies and the phones they offer. Still, it seems Samsung has jumped out to somewhat of an early lead with this announcement.