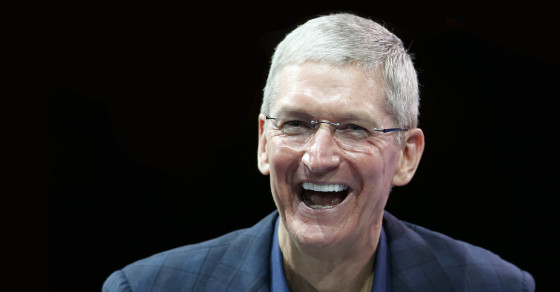 Apple posted mind-boggling quarterly revenue of $75 billion on Monday, making Apple’s last three months in 2014 the most profitable quarter for any company—ever. The profits were primarily driven by the company’s smartphone division, which sold 74.5 million iPhones in the last quarter alone.

Meanwhile, Sony is laying off 1,000 workers in its own smartphone division, which lost about $1.5 billion last year. (Do you know anyone who owns a Sony smartphone? Exactly.) Sony’s dominance of the consumer tech market has been on the decline for over a decade. The company had a market capitalization in 2000 of $150 billion—today it’s down to $27 billion.

Apple, meanwhile, is now valued at $700 billion and has a $178 billion cash pile, which means it could buy Sony six times over and still have money for lunch.

"We sold 34,000 iPhones every hour, every day of the quarter" says Apple's Tim Cook