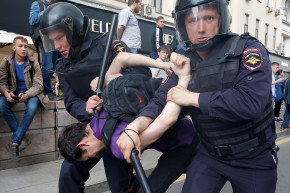 Russians are blaming riot police for their brutal treatment of protesters during anti-Kremlin rallies that swept the country on Monday, sharing images and videos of baton-wielding policemen beating and kicking demonstrators. Over 1,400 people were detained by authorities, reported OVD-info, a local Russian nongovernmental group.

“They harshly detained and beat with their feet and clubs, beat my head against the police car,” tweeted Yan Katelevsky, one of many protesters who took part in the protest and claimed to have been beaten by riot police.

Katelevsky uploaded a video that allegedly showed him sitting with other protesters in a police car. Yulia Galiamina, a leading opposition figure, claimed “a policeman hit me in the face with his fist. My husband was badly beaten, they broke his glasses.” She shared her photos from the hospital where she was being treated. Some said they hadn’t seen this level of violence in the country since 2012, when thousands demonstrated in Moscow’s Bolotnaya Square against the fraud-tainted parliamentary elections.

Yulia Galiamina in hospital after the protest

Translation: “The police are already beating people with clubs. All, indiscriminately.”

OVD-info said that in Moscow alone more than 860 people were arrested, figures Russian authorities reject, claiming instead that the number was closer to 150 and insisted police behaved “calmly.” The White House officially condemned the crackdown and called on Moscow to release peaceful demonstrators. “The United States strongly condemns the detention of hundreds of peaceful protesters throughout Russia,” White House spokesman Sean Spicer said at a news briefing according to Reuters. “Detaining peaceful protesters, human rights observers and journalists is an affront to core democratic values.”

Police brutality in Russia has been a public issue for several years, with near-daily reports of beatings, shootings, and deaths in police stations occurring throughout the country. The problem became so bad that in 2010, then-president Dmitry Medvedev ordered an overhaul of the police and security services. The problem does not appear to have subsided, as data provided by Russia’s Ministry of Internal Affairs and news reports shows that in 2016, 99 people died inside Russian police stations.

Monday’s protest was organized by Alexey Navalny, a Russian opposition leader who has vowed to oppose Russian President Vladimir Putin in the 2018 presidential election. Navalny himself was detained as he left his house to join the protest in Moscow. He’d called for demonstrations after the Kremlin refused to respond to his protest action in March and his report accusing Prime Minister Dmitry Medvedev of using charities and NGOs to collect donations from tycoons and state banks.