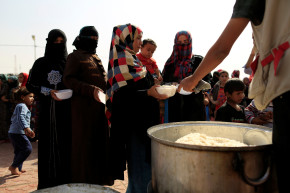 Spoiled food was delivered as dinner for 2,000 displaced Iraqis breaking their Ramadan fast

Hundreds of people have fallen ill and at least one child has died of food poisoning that struck a camp for displaced Iraqis who’d fled fighting in Mosul in Iraq. According to the Kurdish news outlet Rudaw, the spoiled food was delivered by a Qatari charity organization from a local restaurant in Erbil as dinner for 2,000 displaced Iraqis breaking their Ramadan fast at the Hassansham camp. Kurdish authorities recorded around 800-900 instances of food poisoning, with hundreds of people complaining of vomiting, stomach aches, and were sent to hospitals for treatment.

Local Iraqi social media accounts uploaded images and videos of children crying and women being evacuated from the camp to receive medical attention.

Mosul. Listen to the crying of the children and women

Food poisoning of more than 750 people, a woman and a child dead in Hassansham camp for displaced people north of Mosul

Rizgar Obed, a camp supervisor from the Barzani Charity Foundation, told Rudaw that authorities had previously banned outside organizations from bringing food to the camp, but they changed the regulations because they were “under great pressure.”

The camp is of one 12 established by the UN Refugee Agency (UNHCR) to provide shelter to currently 316,000 internally displaced Iraqis near Mosul. Nearly 750,000 people have fled the northern Iraqi city has the military campaign to re-take Mosul from the Islamic State stretches into another month. ISIS fighters have been pushed out of most of the districts in Mosul, and currently control only several square kilometers in the city’s west, claimed an Iraqi official.