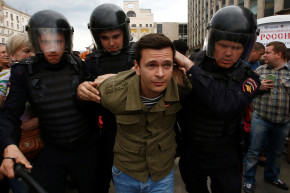 One Kremlin critic was detained during a protest, another while leaving his house to join demonstrators in Moscow

Police detain opposition figure Ilya Yashin during an anti-corruption protest in Moscow — REUTERS
By Tanya Bekker
Jun 12, 2017 at 9:07 AM ET

Thousands of Russians in cities across the country joined in anti-corruption protests against the Kremlin on Monday, with many people arrested including opposition leader Alexey Navalny.

Navalny, who has vowed to oppose Russian President Vladimir Putting in the 2018 presidential election, was detained as he left his house to join the protest in Moscow, his wife has said.

At least 100 demonstrators were arrested in Moscow and some 130 in St. Petersburg, according to OVD-info, an non-governmental organization that monitors politically-motivated arrests in Russia.

Rallies began in the country’s far east and Siberia regions ahead of the main protest in Moscow, which Navalny had intended to lead. Prior to his arrest, Navalny claimed authorities had pressured companies to refusing to supply audio and video equipment to humiliate the protesters. Moscow authorities warned protesters: “If a person comes with a political poster or shouting slogans, he is a 100% a potential ‘client’ of policemen.”

In the photo, a rally in the city of Vladivostok, where according to the data of the OVD-info, 11 people were detained.

Translation: “In Novosibirsk, about 5,000 people came to the rally against corruption, more than on March 26. Without detentions.”

Even with the threat of arrests Muscovites and residents of other cities continue to gather in the streets.

Translation: “To the rally. Have bought all the flags in the store.”

Monday in Russia is a public holiday, Russia Day, and citizens usually go out for festivities in the city centers to mark the day.

Navalny called for demonstrations after the Kremlin refused to respond to his protest action in March and his report accusing Prime Minister Dmitry Medvedev of using charities and NGOs to collect donations from tycoons and state banks. In the report, Navalny accused the prime minister of using the funds to buy vineyards, luxury yachts, and opulent mansions. The Prime Minister’s press secretary Natalia Timakova and presidential spokesman Dmitry Peskov declined to comment on the accusations.

Russia ranked 131st place out of 176 countries in the 2016 Corruption Perception Index of Transparency International.

The nation-wide movement appeared to be one of the largest coordinated outpourings of dissatisfaction since the massive 2011-12 demonstrations that followed a fraud-tainted parliamentary election. During a March 2017 protest that was organized by Navalny, over 1,000 were arrested.

Alexey Navalny, a popular anti-corruption leader who plans to challenge Putin at next year’s election – if he can get on the ballot. A contradictory figure, with ties to both the pro-democracy movement and Russian nationalists, Navalny made a name for himself with a series of explosive investigations into high-level corruption. His efforts to run for president may be complicated by his arrest on Monday.

A rally in the city of Vladivostok.