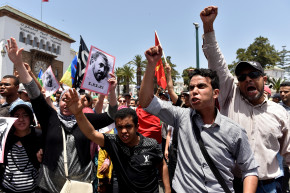 Morocco Witnesses Its Biggest Protests In Years
By Gilad Shiloach

Morocco is witnessing a wave of anti-government demonstrations after thousands have taken to the streets of the capital Rabat and other major cities over the weekend. Local authorities estimated the number of protesters ranged between 12,000 and 15,000, a figure activists derided, claiming the number was closer to a million.

The protest was a show of solidarity against corruption and abuse in Morocco’s neglected Northern Rif region, which has a largely ethnic Berber population. Demonstrators demanded the release the scores of activists who were arrested during the turmoil in the Rif, including protest leader Nasser Zefzafi.

It was one of the largest protests of its kind in years for the North African monarchy, and political unrest is rare. The leading force was the Islamist “Justice and Spirituality” movement which is banned from official politics but according to Reuters is the only opposition group able to mobilize on a massive scale as they did during the Arab Spring protests in 2011.

Videos uploaded to social media show protesters waving Moroccan and Berber flags, chanting for “Freedom, Dignity and Social Justice” and denouncing “the crimes of the government against the Rif.” According to Reuters, protesters also chanted against the “ruling mafia” saying “your corruption is starting to stink.” Others images allegedly showed hundreds attending a rally in front of Zefzafi’s house in Houceima late Sunday, shouting “We are all Zefzafi.”

Morocco’s northern protests were prompted last October after a fish seller was crushed inside a garbage truck while trying to salvage his fish after it had been confiscated and thrown away by police. His gruesome death sent thousands into the streets, and the incident became a symbol of frustration for the neglected region.