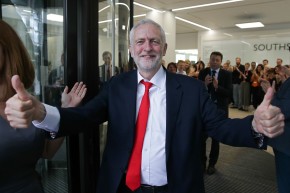 The Labour Party didn't win, but the populist agenda of its leader is here to stay and some supporters of Vermont Sen. Bernie Sanders on social media think that's a good sign.

Despite not taking a majority in the United Kingdom’s general election on Thursday, the Labour Party’s strong showing has caused an old question to gain new life: could Vermont Sen. Bernie Sanders ever win the presidency if he were to go against President Donald Trump? On social media, thousands think the answer is yes.

More than 10,000 tweets containing the phrases “Bernie would have won” or “Bernie could have won” were on Twitter just 12 hours after the polls closed in Britain.

We could have done this here.

This has been hashed and rehashed a million times. #bernielost get over it

Can both sides on the “Bernie would’ve won” debate just…let it go? Most meaningless & divisive counterfactual ever. — Elliott Lusztig (@ezlusztig) June 9, 2017

The high volume of tweets suggests that many people have still not come to terms with the 2016 Democratic primaries, with Sanders having lost both on the popular vote and in delegates to Hillary Clinton. But the discussion on Twitter, as well as the parallels to what the Labour Party did overseas, could eventually mean something for a Democratic Party that’s still doing some soul-searching in the early days of the Trump administration.

It’s also not the first time Americans have tried to figure out Corbyn’s influence on the current political landscape. In December 2016, President Barack Obama told his former senior adviser David Axelrod that the “Corbynization” that happened to the Labour Party, which has moved even further left under Corbyn’s leadership, is not likely to happen to the Democrats in the U.S.

“I don’t worry about that, partly because I think that the Democratic Party has stayed pretty grounded in fact and reality,” Obama told Axelrod at the time.