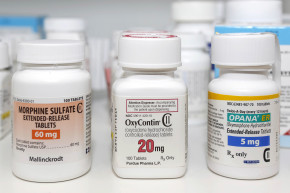 For the first time, the Food and Drug Administration is calling for an opioid pain medication to be taken off the market due to concerns surrounding abuse. The drug, Opana ER, is an especially potent painkiller used to treat daily, long-term pain.

“After careful consideration, the agency is seeking removal based on its concern that the benefits of the drug may no longer outweigh its risks,” FDA Commissioner Scott Gottlieb said in a press statement. “We will continue to take regulatory steps when we see situations where an opioid product’s risks outweigh its benefits, not only for its intended patient population but also in regard to its potential for misuse and abuse.”

Opana ER, which is stronger than many of its competitors such as Oxycodone and morphine, was first released in 2006. It was reformulated in 2012 with the intention of making it less likely to be abused via injection or snorting, but data found those efforts to be unsuccessful. In 2015, the drug was found to be at the center of an outbreak of HIV and hepatitis C in Indiana. Without a needle exchange program (something then-governor Vice President Mike Pence dragged his feet on), nearly 90 users injecting Opana in the north of the state had contracted HIV.

More The Paragraph That Helped Kick Off The Opioid Crisis

An FDA advisory committee reviewed data on the abuse of the drug in March, voting 18 to 8 that the drug’s risks were outweighing its benefits.

Endo Pharmaceuticals, which manufactures Opana ER, has released a statement saying the company is “reviewing the requedst and is evaluating the full range of potential options as we determine the appropriate path forward.” If Endo does not pull Opana ER from the market, the FDA says it will begin the formal process that would require it to do so.

The opioid crisis was found to have killed 50,000 Americans in 2015, and governors of at least five states have declared its level of threat as an emergency.