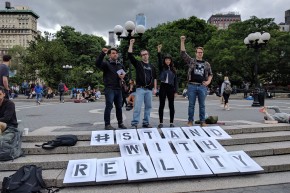 As Reality Winner Denied Bail, Activists Fear For Her Future
By Janus Kopfstein

As Reality Winner Denied Bail, Activists Fear For Her Future

Government transparency advocates are rallying support for Reality Winner, the intelligence contractor whose Saturday arrest is, they say, the first strike in the Trump administration’s burgeoning war on whistleblowers.

Winner, a 25-year-old working for the National Security Agency, pleaded not guilty to espionage charges on Thursday after her arrest over the weekend in Georgia. The Department of Justice has accused her of leaking an explosive NSA report published earlier this week by The Intercept, which details attempts by Russian intelligence services to hack voting systems controlled by state and local governments during the 2016 U.S. election. A Georgia judge denied Winner’s bail Thursday evening.

On Wednesday, a small group of activists gathered on the southern steps of Union Square Park in Manhattan for a makeshift press event for a campaign supporting Winner’s legal defense. The turnout for the rally was sparse, as members of the group arranged stenciled cardboard letters along the steps to spell out the surreal hashtag #StandWithReality.

“What Reality is accused of flies in the face of an unbelievably opaque and unaccountable administration,” said Andy Stepanian, an activist and co-founder of the grassroots activist PR shop The Sparrow Project, when he addressed a smattering of journalists and livestreamers  at Union Square Wednesday. “It’s eye opening to see that the opening salvo of the Trump administration’s war on leaks is [against] a young woman. I find it quite telling that they’re targeting a young woman at the low end of the totem pole in hopes that trepidation will spread to the top.”

Some of the activists openly feared that unlike the accused whistleblowers before her, Winner’s case would be merely a blip in another highly chaotic news cycle under the Trump administration. Judging by her social media presence, Winner has also made no secret of her opposition to Trump, which has angered Trump supporters and led transparency advocates to worry that her leaks will be seen as a proxy in the fight between Democrats and Republicans.

Like Chelsea Manning, Edward Snowden, and other leakers and whistleblowers who came before her, Winner potentially faces decades in prison under the Espionage Act, the century-old statute infamously used by the Obama administration to prosecute more leakers than all previous administrations combined. And like in those previous cases, the law will block her from being able to argue in court that her alleged leaks were done to release information in the public interest.

“The prosecution of any journalistic source without due consideration by the jury as to the harm or benefit of the journalistic activity is a fundamental threat to the free press,” NSA whistleblower Edward Snowden wrote in a statement published by the Freedom of the Press Foundation. “As long as a law like this remains on the books in a country that values fair trials, it must be resisted.”

The Courage Foundation, a non-profit advocacy group that supports whistleblowers, said it plans to launch a fundraiser for Winner’s legal defense. A separate campaign on GoFundMe has already raised over $17,000 in coordination with Winner’s family to help pay for her legal expenses.

“When we have this little transparency, people pretty quickly see that releasing documents to the media is the only way these things are going to get reported on,” said Nathan Fuller, a campaigner with The Courage Foundation, during the Union Square event. “I would expect more of these cases to come up in the future, and that’s why it’s important to support her right away.”