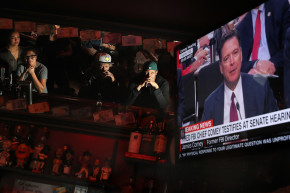 Bars across the United States opened early Thursday in hopes of hosting patrons who needed a stiff drink to get through the live Senate testimony by former FBI director James Comey on the events that led to his dismissal by President Trump. But many who couldn’t leave the office in favor a watering hole were still talking about wetting their whistles.

During Comey’s testimony — during which he revealed, among many things, that he personally told a friend to leak a memo to the press in hopes of triggering a special counselor and that he has no doubts Russia interfered with the 2016 election — people on Twitter posted rules to the drinking games they were playing (or wishing they could play) as the hearing unfolded.

If you're playing the #ComeyDay drinking game, bottoms up. Hillary's emails were already mentioned before Comey uttered a word. pic.twitter.com/oTH4Zvm45w

– Every time you breathe, drink.

Ok, I am officially leaving today's "Comey/Trump Drinking Game."
I am switching to a new game, with simpler rules.
It's called "Drinking"

But it wasn’t just people on Twitter. The Seattle Times even published rules for a Comey testimony drinking game, while some made bingo cards.

fresh off the press Comey Hearing Bingo cards made by your's truly. pic.twitter.com/wfqECSuEwh

Print out your Comey Bingo card, and get this party started! https://t.co/GW0MmDtBKV pic.twitter.com/v8vfrd0KHx

This is yet another sign of how Donald Trump’s presidency has turned American government into a type of political entertainment. While this is common for election nights and debates, it’s telling that Comey’s testimony — the seriousness of which cannot be overstated — became for some a parlor game.