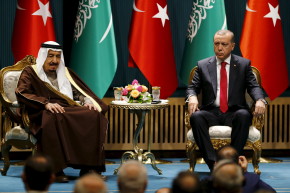 Turkey Takes Qatar’s Side In Regional Rift
By Gilad Shiloach

The latest development in the regional rift between Saudi Arabia and Qatar now includes Turkey. Ankara has taken Doha’s side in the dispute, urging a boycott of Saudi products and having its parliament draft a bill ready to support the tiny Gulf state militarily should the need arise.

The moves have enraged Saudis online, with more than 125,000 tweets posting in retaliation to “Boycott Turkish Products” (#مقاطعه_المنتجات_التركيه). Many are calling Turkish President Recep Tayyip Erdogan a “traitor who has allied with the devil.” Users posted images that show people how to recognize Turkish food brands in local markets said and said stopping tourism to Turkey was “a national duty.”

Turkey’s parliament approved on Wednesday a draft bill that allows the military to send its troops to Qatar to “contribute to regional and world peace,” according to the Turkish Anadolu Agency. The step comes only days after Saudi Arabia, Egypt, the United Arab Emirates and Bahrain caused a rupture in the Middle East by severing all ties and isolating Qatar, one of Turkey’s strongest allies in the region, accusing the small and rich Gulf monarchy of supporting terror groups and attacking it because of its relationship with Iran. Along with banning air and sea travel, Saudi Arabia has also closed Qatar’s only land border which is vital for the small country to import food and other products. The move sent Qataris into a panic, emptying shelves at local supermarkets of food, all during the Muslim holy month of Ramadan.

In addition to the military support, Turkey’s main exporting industry body said it was ready to meet food and water demands to prevent any food shortages, Reuters reported. Aiming to overcome a potential food crisis, the Qatari Ministry of Economy and Commerce launched a social media campaign titled “I support Qatari products” (#ادعم_المنتجات_القطرية) urging citizens to buy local. Some 15,000 tweets were posted during the campaign, in which people posted photos of Qatari products they said they purchased from local stores.

Turkey has intensified its relations with Qatar and allied with Doha since the beginning of the Arab Spring in 2011 to support the Muslim Brotherhood movement in the region. That support included Egypt’s Muslim Brotherhood, whose leader was ousted as president by the military in 2013. Turkey also supports Palestinian Hamas and major Islamist rebel groups fighting in Syria against the regime there.