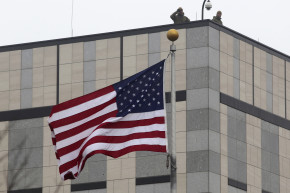 Kiev police said that an unidentified assailant threw an explosive device into the U.S. embassy compound in the Ukrainian capital in an incident being investigated as an act of terror.

Police said the explosion went off just after midnight, local time. As of Wednesday morning, authorities were still searching for the perpetrator.

“I think that this was done per the instructions of the Russian Federation,” said Anton Gerashchenko, Ukrainian adviser to the minister of internal affairs. “It’s a good way to roil the information space and get international news feeds saying that Kiev is not safe.”

The embassy confirmed the incident involved a “small incendiary device,” but apparently contradicted police in saying that it does not consider the episode a terrorist act.

#Ukraine's authorities treat the #IED explosion on the grounds of #US #embassy in #Kiev as #terrorism act:https://t.co/xBYG68Usdg pic.twitter.com/0sAoaRXB7g

A brutal war between Russia and Ukraine that has killed over 10,000 people has been ongoing since 2014, when Russia’s military intervened after the ouster of the pro-Russian President Viktor Yanukovich.

This is a developing story, please check back for updates.