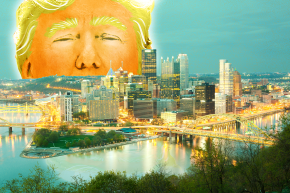 PITTSBURGH, Pa.— A week ago, President Donald Trump gave his justification for his historic decision to pull the U.S. out of the Paris Climate Agreement: “I was elected to represent the citizens of Pittsburgh, not Paris.”

The line seemed designed for Trump’s base — conservatives who lament the U.S.’s decline as a manufacturing powerhouse, and who don’t understand or don’t want to understand why scientists warn about climate change. But for many Pittsburghers, the shout-out was a shock — and not a welcome one, as Vocativ found out in a visit to the Steel City in the wake of Trump’s comments.

“The kind of overwhelming sentiment in Pittsburgh was, keep our city’s name out of your mouth,” said Kelsey Halling, director of sales at Thread, a Pittsburgh company that recycled Haitian plastic and works it into fabric that’s used in American brands like Timberland and Kenneth Cole.

It perhaps shouldn’t be surprising — Pittsburgh didn’t like Trump much to begin with. While Trump loves to tout the fact that he won the majority of U.S. counties in the 2016 election, and won most of Pennsylvania, Pittsburgh is the one part of western Pennsylvania he couldn’t penetrate. Allegheny County, where the city sits, strongly preferred Hillary Clinton.

The other implication in Trump’s claim — that Pittsburgh and its economy are somehow stagnant — doesn’t bear out, either. While manufacturing jobs have declined in the area, Pittsburgh’s education and medical industries have surged, giving the city and surrounding area a lower than average unemployment rate.

Long gone are the bellowing mills and omnipresent soot of the city’s steel manufacturing heyday. Today, Pittsburgh is in the midst of urban renewal, with even poorer neighborhoods experiencing revitalization, and an economy fueled by “meds and eds.” Visitors are more likely to stumble into a craft brewer than meet a steel worker.

And more than most cities in the mid-Atlantic, midwest, and Appalachia, Pittsburgh’s tech sector is thriving. Uber has a campus there, as does Google. Buoyed by robotics research at Carnegie Mellon University, a new robotics startup, Argo, just received a $1 billion investment from Ford to help develop its upcoming line of self-driving cars.

That investment in technology extends to a surging green energy movement, too. The city employs 13,000 workers in renewable energy, according to the mayor’s office.

“Pittsburgh still has a very strong manufacturing base, so those roots of our industrial past are still here,” Ron Gdovic, CEO of WindStax, which manufactures wind and solar energy systems for commercial clients around the world, told Vocativ. “We knew that we could build things here, and indeed that’s what we did. So we were pleasantly surprised to not only find find great customers here after the fact, but be able to manufacture our components here as well.”

Perhaps no one underscores Pittsburgh’s reluctance to be the figurehead for U.S. climate denial than Pittsburgh Mayor Bill Peduto. On Wednesday, Peduto, who comfortably won reelection in 2016, wrote an op-ed with Paris Mayor Anne Hidalgo affirming his city’s commitment to the Paris Agreement, regardless of Trump’s decision. The city aims to slash greenhouse gas emissions by 20 percent over the next six years, and plans to power the city itself purely with renewable energy by 2035.

“Though separated by an ocean and a language, we share a desire to do what is best for our citizens and our planet,” they wrote. “That means putting aside parochial politics and embracing the global challenge of fighting climate change. In doing so, we can create a cleaner, healthier, more prosperous world for Parisians, Pittsburghers and everyone else on the planet.”