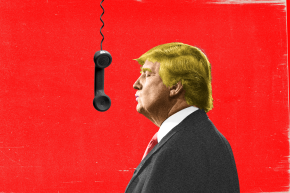 Privacy advocates had hoped Trump, and his anger at surveillance, would make him an advocate for reform

Despite President Trump’s repeated, unsubstantiated claims that he was “wiretapped” by former President Barack Obama, the White House says it supports extending a controversial surveillance law.

That’s a blow to privacy advocates, who had hoped Trump might be an unlikely ally in their attempts to amend Section 702 of the FISA Amendments Act, which authorizes intelligence agencies like the NSA to broadly surveil foreign targets — and sometimes in the process, vacuum up Americans’ online communications too. By design, FISA expires every five years and must be renewed by Congress and the President. It’s currently set to expire in December.

Section 702 authorizes, for example, routine phone surveillance of foreign dignitaries. In February, Trump’s National Security Advisor, Michael Flynn, resigned after revelations that despite his claims to the contrary, he had secretly had phone conversations with Russian Ambassador Sergey Kislyak about lifting Obama-era sanctions on Russia. Those conversations were only recorded because Kislyak, a foreign intelligence official, was a natural target for foreign surveillance, intelligence officials said.

Trump has also insisted that Obama had “wires tapped” his phones during his campaign, though he never provided evidence. Obama himself, as well as James Comey who — was FBI director under both Obama’s presidency and Trump at the time — strongly insisted such a practice would have been illegal.

In May, Trump seemed to reiterate that claim, telling CNN that “I don’t stand by anything. I just, you can take it the way you want. I think our side’s been proven very strongly,” though he still didn’t provide any evidence.

Terrible! Just found out that Obama had my "wires tapped" in Trump Tower just before the victory. Nothing found. This is McCarthyism!

Trump’s concerns with surveillance sparked hopes that his anger at Flynn’s departure would spur him to insist on more privacy protections before agreeing to reauthorization. But in an op-ed in the New York Times Wednesday, Trump’s Homeland Security Advisor, Tom Bossert, gave his full endorsement of a new Republican bill in the Senate that not only reauthorizes Section 702, but makes it permanent.

“After months of criticizing the government for allegedly spying on his presidential campaign, President Trump is now hypocritically endorsing a bill that would make permanent the NSA authority that is used to spy on Americans without a warrant,” Neema Singh Guliani, legislative counsel at the ACLU, said in a statement.