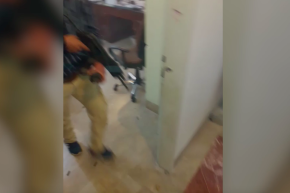 "ISIS will stay here until doomsday," said the apparent attackers

ISIS’ official news outlet Amaq posted a video featuring two apparent terrorists, one toting a gun, from inside the Wednesday morning attack on the Iranian Parliament in central Tehran, for which the group claimed responsibility.

The terrorist group also claimed a simultaneous suicide bombing carried out at a religious shrine for Ayatollah Ruhollah Khomeini, the founder of the Islamic Republic, outside of the capital. At least 17 people were killed and more than 40 wounded in the twin attacks, according to Iranian emergency medical services.

Iran’s revolutionary guards said Saudi Arabia — which Iran has accused of financially, ideologically and logistically supporting ISIS — was behind the two attacks, according to an official statement.

The group said that the footage was filmed by one of its fighters from inside of the Parliament, where sirens were heard blaring and there was at least one casualty lying on the floor, covered in blood.

“Praise God. Do you think that we will leave? We will survive, with the permission of God,” said an unidentified voice in the video. “ISIS will stay here until doomsday.”

“ISIS will stay here until doomsday,” repeated another man in the video.