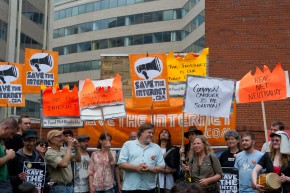 The coalition, including Amazon, Reddit, and many activists, won't let the internet go down without a fight

Major tech companies and grassroots activists are planning an “internet-wide day of action” to oppose the Federal Communications Commission’s plan to gut rules protecting net neutrality, which ensures telecommunications providers like Verizon and Comcast can’t prioritize some sites and services while blocking or slowing down others.

On July 12, major sites that have signed on so far, including Reddit, Amazon, Github, and Kickstarter, will call on users to rally against the FCC plan, which has been spearheaded by Donald Trump-appointed FCC chairman and vehement net neutrality opponent Ajit Pai.

The campaign is being led by Fight For The Future, an internet advocacy group that famously led online campaigns against the internet censorship bill SOPA during the Obama administration. At the time in 2012, it was the largest online protest in history and many large and small sites “went dark” to raise awareness, according to The Guardian. The massive outpouring that resulted forced many politicians who supported the bill to reverse their stance.

In 2014, the FCC’s board voted in favor of an Open Internet rule that firmly established the internet as a public utility, thus preventing internet service providers from prioritizing some sites over others. But Pai and the Trump administration have since made it clear that they aim to reverse that decision, proposing a new rule that would effectively demolish regulations established just a few short years ago. In May, the Republican-majority FCC board voted 2-1 in favor of eliminating the Open Internet rule, setting the stage for a full repeal vote later this year.

So far, Fight For The Future says that 15 companies and 30 advocacy groups have signed on the participate in the July action, which will provide visitors with tools to contact Congress and the FCC in support of preserving net neutrality — a tactic that has been effective in the past, bringing thousands of public comments voicing opposition to the multi-billion dollar telecommunications companies and their efforts to eliminate net neutrality protections.

More The U.S. Without Net Neutrality: How An Internet Nightmare Unfolds

More recently, the public comments process has taken a more chaotic turn. The FCC’s commenting system was mysteriously spammed with thousands of identical anti-net neutrality messages last month, many of which used the real names and addresses of people whose information was apparently stolen in a data breach. But Pai and the FCC have nevertheless chosen to honor the fake comments, with a spokesperson telling Vocativ that the commission is “erring on the side of inclusion.”