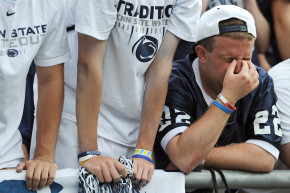 Why Is Penn State Promoting Its Convict Ex-President?
By Robert Silverman

Why Is Penn State Promoting Its Convict Ex-President?

Dr. Graham Spanier has been convicted of endangering the welfare of children, but Penn State seems to have no issue with that

On April 21, the Penn State theatre department published an interview with a 2012 alumnus of its MFA program named Sara Ellis in which she talked about her career, life on the road, and her undying love for Penn State. It’s the kind of piece you’ll find in any college alumni mag, if not for one significant exception: the individual who conducted the interview was Dr. Graham Spanier, Penn State’s disgraced former president.

The article fails to mention that Spanier resigned in 2011 when it was revealed that he, along with head coach Joe Paterno and two other Penn State administrators, actively worked to cover up the crimes of convicted child molester Jerry Sandusky. Infamously, the group failed to notify the proper authorities after Mike McQueary, then a graduate assistant, said he had seen Sandusky in the shower with an underage male in 2001.

Spanier, who chose to keep the matter “in house” at the time, was charged in 2012 and, on March 24 of this year, was convicted of endangering the welfare of children. On Friday, he was sentenced to a maximum of 12 months in jail and house arrest, plus a $7,500 fine, two years’ probation, and 200 hours of community service.

The interview with Ellis was published on April 2, meaning Penn State ran the article after Spanier was found guilty. In fact, they gave Spanier a forum to write eight similar articles throughout the entirety of the legal process, starting in 2014.

If this were but one instance of Penn State edging towards bringing Paterno and crew back into its public sphere it could perhaps be easily dismissed. It isn’t.

Members of Paterno’s family have conducted charity runs at Beaver Stadium with the grinning participation of Penn State’s current head football coach and university officials; Paterno’s son, Jay, who has never stopped proclaiming his father’s innocence, was elected to the Penn State Board of Trustees; and on opening day weekend 2016, a slew of former players and other notable grads were brought back on campus to offer their teary, heartfelt remembrances of JoePa, for an event titled, “Grand Experiment: A Golden Legacy,” which celebrated the 50th anniversary of Paterno’s first season.

During the game, a special video tribute to Paterno was shown. Though a few protesters, largely visiting Temple fans, turned their backs, the Penn State crowd rose and gave the short film a standing ovation – a  moment of vindication for the small if rabid and vocal gang of alumni who will never be convinced of Paterno’s guilt and desperately want the statue of JoePa restored to (in their minds) its rightful place outside Beaver Stadium.

Vocativ reached out to the Penn State graduate theatre department to ask why they feel comfortable publishing and promoting an individual found guilty of endangering children and whether any of the interviewees were notified of Spanier’s criminal history. A spokesperson said that the request has been passed along to “the appropriate parties,” but asked for patience. “This is an extremely busy time of year for us as you can imagine,” the spokesperson said via email.

To date, Vocativ has not received a response. We will update this post if Penn State chooses to comment. But according to Barbara Dorris, the managing director of SNAP, a nonprofit organization that provides support to child victims of sexual abuse by religious authority figures and a frequent critic of Penn State, the damage has already been done.

“It’s a way of saying that the crime didn’t matter,” said Dorris. By publishing Spanier, “The message from Penn State is very clear: ‘Well, you know, If you protect a predator, no big deal’… And even when [people like Spanier] are convicted, it still doesn’t seem to be a big deal. It’s almost like they’re saying, ‘It’s okay to rape kids.'”

For Dorris, the Spanier interviews are yet another example, along with an attempt by President Eric Barron to discredit recent allegations that Sandusky’s crimes dated as far back as the 1970s, of Penn State perpetuating and reinforcing a culture that allowed the assaults to occur in the first place.

“As somebody who takes these calls from victims almost all day long, the damage they’re doing to those kids on that campus…,” she said, her voice trailing off before mentioning that one in nine girls and one in 53 boys under the age of 18 will be the victims of sexual abuse and/or assault, per RAINN.

“That’s, to me, the real damage they’re doing.”