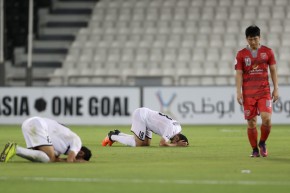 The oil-rich, monarchical Gulf state of Qatar was always a dubious choice to host a World Cup, to put it mildly, but the 2022 edition of the soccer world’s crown jewel is now in jeopardy after several Middle Eastern neighbors abruptly cut diplomatic ties and closed its borders to Qatar.

Egypt, Saudi Arabia, Bahrain, the United Arab Emirates, and Yemen all made the announcement on Monday over concerns that Qatar has harbored support for Hamas and the Muslim Brotherhood. The Financial Times reported that the tipping point for those countries was a reported $1 billion ransom paid to free members of the royal family (who had been kidnapped as part of a falconry party in southern Iraq) and militants captured by jihadists in Syria, with the payments earmarked for “two of the most frequently blacklisted forces of the Middle East in one fell swoop: an al-Qaeda affiliate fighting in Syria and Iranian security officials.”

To accommodate Qatar’s hosting of the World Cup—it is a desert, after all, whose July temperatures reach daily high temperatures around 106 degrees—FIFA moved the summer event to the winter, is alleged to have taken bribes (corruption allegations have been denied), and has largely looked the other way as Amnesty International and other advocacy groups allege massive human rights abuses of the migrant workers building the necessary stadiums and infrastructure for the tournament.

The new political matter might be a more serious threat to Qatar’s ability to host. The so-called supreme committee organizing the event has not yet commented, but a Guardian source “acknowledged that the seriousness of the crisis is greater than any of the formidable challenges Qatar has faced since winning the vote in 2010 from FIFA’s now discredited executive committee.”

Though Qatar is the richest country in the world, per capita, this new blockade is a major issue that, if it persists, “would wreak havoc on the timeline and delivery” of the World Cup, as Kristian Ulrichsen, a Gulf analyst with the Baker Institute at Rice University in Houston, told Reuters. The majority of its food imports arrive via its one land-based portal, the border with Saudi Arabia that is now closed, prompting many citizens to rush to grocery stores on Monday. Much of the nearby airspace is now closed to Qatar as well, leaving routes over Iran as the best option for the national airline, Qatar Airways, which adds significant time and hassle. (Qatar Airways is a recently announced FIFA sponsor.)

Nasser Al-Khater, who has the regal Qatari title of Assistant Secretary General for Tournament Affairs for the Supreme Committee for Delivery & Legacy, has said as many as 1.3 million fans would travel to Doha for the 2022 World Cup—with the majority from other Gulf states and, of that number, “mainly from Saudi Arabia.” That’s problematic right now. So much for Qatar’s initial selling point as “one of the most stable countries in the Middle East,” Ulrichsen said, to AFP.

While FIFA’s statement only said the governing body was “in regular contact” with the appropriate Qatari committees, Reinhard Grindel, president of the German soccer federation and a FIFA council member, said in a statement that his group would “discuss the new, complex political situation in the region,” emphasizing the five years until the Cup begins.

“During this time priority should be given to political solutions rather than threats of boycott,” Grindel said.

“But one thing is clear. The football community worldwide should agree that … major tournaments should not be played in countries that actively support terror.”

Qatar’s foreign ministry, meanwhile, offered its own statement, claiming to be the victim of an apparent fake conspiracy: “The state of Qatar has been subjected to a campaign of lies that have reached the point of complete fabrication. It reveals a hidden plan to undermine the state of Qatar.”

FIFA, which has admitted the corruption of its own officials in court documents, is hardly seen as a spine-having entity that might take a bold stand to protect the integrity of its product, but some logistical hurdles—the inability to get necessary construction supplies and subsequent impediments to fans actually attending games—might force their hand. There are several countries with the ready-made arsenal of stadiums that could host such an event on relatively limited notice.

“Qatar will know that there are alternatives,” Ulrichsen told the AFP, “so they will be looking over their shoulder.”