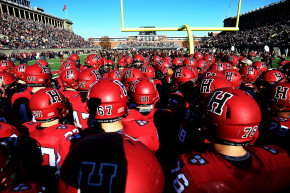 In a group chat for the class of 2021, students mocked feminism, child abuse, and minorities

Former Harvard student Mark Zuckerberg was almost expelled for creating a website where classmates could rate each other’s attractiveness. Almost 15 years later, ten incoming students admitted to Harvard will be denied enrollment in the class of 2021 because of their behavior on the platform Zuckerberg’s questionable website became — Facebook.

According to Harvard’s student newspaper The Crimson, the school rescinded admission offers to at least ten students after a Facebook group chat devolved into sharing sexually explicit, racially insensitive, and otherwise offensive memes. The group chat was an offshoot of the school’s official Facebook group for the class of 2021.

Harvard’s Admissions Office was made aware of the group in mid-April and sent an email to students demanding an explanation:

“The Admissions Committee was disappointed to learn that several students in a private group chat for the Class of 2021 were sending messages that contained offensive messages and graphics,” one of the emails obtained by The Crimson reads. “As we understand you were among the members contributing such material to this chat, we are asking that you submit a statement by tomorrow at noon to explain your contributions and actions for discussion with the Admissions Committee.”

Colleges set up Facebook groups for incoming classes to get to know each other before school begins. Students often swap personal stories and ask questions about logistics of the coming year, but especially for undergraduate students, these can go south in a hurry.

This wasn’t even the first time this has happened at Harvard. Last year, incoming students started a GroupMe chat that devolved into mocking feminists, minorities, in addition to other off color remarks.

Harvard’s decision is sure to come under scrutiny as universities continue to weigh the pros and cons of so-called “safe spaces.” According to The Crimson, the decision seems to have both proponents and critics among the student body. On one hand, the school is obligated to protect its students. On the other hand, if it denied admission to every high school kid who said something offensive, no one would ever go to college again.