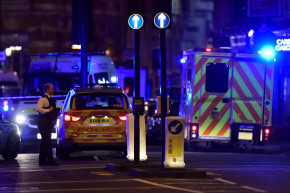 Three unidentified assailants rammed a white van into a crowd of pedestrians before embarking on a stabbing rampage near London Bridge, killing eight people, and injuring 48 more, according to London emergency services.

Police said that the knife-wielding attackers exited the van and ran to the nearby Borough Market, where they stabbed dozens. Armed police officers encountered and shot the assailants within eight minutes, killing all three at the scene of the attack.

“We are experiencing a new trend in the threat we face as terrorism breeds terrorism,” said British Prime Minister Theresa May following a meeting of the Cobra emergency security committee on Sunday. She added that Britain expressed “far too much tolerance” of extremism and that the country would need to engage in “difficult” and potentially “embarrassing” conversations about the issue.

May said that parliamentary campaigning, which was suspended on Sunday, will resume on Monday and that the elections will take place as planned on Thursday.

No organization has taken responsibility for the attack and authorities have reported no official motive, but the incident is reminiscent of a recent spate of terrorist truck attacks. On Saturday, ISIS published a call for lone-wolf style truck attacks on Westerners during the holy month of Ramadan.

On May 22, a suicide bomber blew himself up in the city of Manchester at an Ariana Grande concert, killing 22 people, including children, and wounding many more.