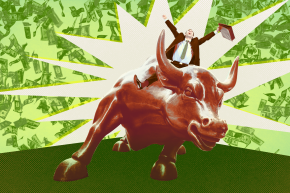 The bankers most responsible rarely suffered any consequences in their career trajectories, analysis shows

Did any bankers actually pay for the 2008 financial crisis? We already know that no major bankers went to jail, as a result of the Obama administration’s policy not to prosecute. Companies, forced to pay $130 billion in fines, would fire or demote responsible executives and employees all on their own, the administration’s thinking went.

That appears not to be the case, as a new study released Thursday reveals. If anything, culpable bankers have seemingly escaped with few career consequences.

A trio of researchers, led by John Griffin of the University of Texas at Austin, looked at over 700 hundred bankers employed at prominent firms in 2004 to 2006. These bankers were the ones who issued residential mortgage backed securities (RMBS), the securities that often bundled mortgages that people could not pay and eventually collapsed when people defaulted. Half of the bankers they studied were senior officers at some of the top banks, and many were directly named in later lawsuits alleging fraud.

Comparing RMBS bankers to other kinds of bankers who had no hand in the crisis, they found their job prospects had barely suffered at all from 2007 to 2016, especially at the top. “We find no evidence that senior RMBS bankers at top banks suffered from lower job retention, fewer promotions, or worse job opportunities at other firms,” they wrote.

There was some evidence that bankers at smaller firms may have had slower careers because of their role, but even that’s suspect. Rather than any sort of punishment, Austin and his team speculated, smaller firms may have just been less able to afford shuffling these bankers to other departments, as the larger banks did.

By 2016, 85 percent of RMBS bankers remained in the industry, while 63 percent had been promoted or gotten a position upgrade elsewhere. Top banks and underwriting firms also had no problem hiring on bankers who left their firms. “We don’t find any evidence of labor market discipline, and there have been no major criminal prosecutions of any individuals,” Austin told Vocativ.

Going one step further, they also looked at possible explanations for this disparity, since financial penalties do seem to encourage some belt-tightening in other labor settings, even within the financial industry. Most of the theories they examined, from banks being gun-shy to fire employees who could later testify against them to banks only firing employees once the fraud was made public, made little sense given the evidence, though.

The only explanations that did were cowardice or deliberate ignorance. Either those in charge never felt what these bankers did was wrong or they feared that outright disciplining them would “implicitly acknowledge widespread wrongdoing and lack of oversight.” And that, god forbid, might have led to these head honchos losing their own jobs.

The authors doubt even larger fines would have changed their carte blanche policy. “A possible implication is that direct criminal prosecutions may be necessary to implement changes to the corporate culture of the world’s largest banks,” they instead concluded.

There had been some hope that the federal government was starting to change its tune on how to deal with rogue bankers. In 2015, now-departed Deputy Attorney General Sally Yates issued a directive to federal prosecutors that they go after individual white collar law breakers as fiercely as possible, the researchers noted. But that attitude, as with much in the Trump era, seems long gone, as does the idea that Wall Street has anything to apologize for anymore.

Earlier this week, it was announced that Republican House members would advance a piece of legislation called the Financial Choice Act next week, putting it to a full House vote. The bill, under the guise of preventing government overreach, would dismantle many of the banking regulations enacted by the Dodd-Frank act passed in the aftermath of the crisis.