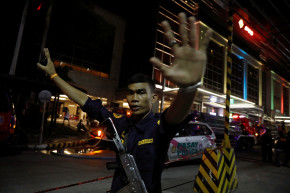 Minutes after news broke of reported gunshots and explosions at a casino resort in Manila, Philippines, early Friday, hundreds of locals took to social media to express their fears. But instead of the concerns being focused solely on terrorism, many of fears echoed on social media focused on what the attack outside of Manila International Airport may mean in terms of the response from its government and Philippine President Rodrigo Duterte.

I hope that the attack in Resorts World Manila won’t be used as a motive to declare martial law nationwide.

Starting to think that all these attacks are being planted so we can have another Martial Law era 😞 — Anissa V (@khalneessi) June 1, 2017

Don’t get me wrong pero I feel that Martial Law will be declared w/in the next 24 hours after the Resorts World Manila incident. — Louis Karl Eusebio (@louiethird) June 1, 2017

According to media reports, Filipino police said that the attack was done by a single gunman who does not appear to have any terrorism links. Law enforcement also doubt that the gunman had any specific connection to the Islamic State, even as a Filipino operative of the group claimed responsibility for the attack, according to several media reports. A police officer at the scene told the New York Times that it was unclear how many casualties, if any, there were from the attack.

The fears on social media of a possible expansion of martial law comes a week after Duterte implemented a 60-day period in Mindanao, one of the nation’s southernmost islands, to help fight ISIS in the city of Marawi.