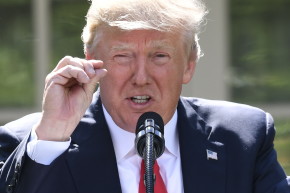 President Donald Trump announced that the United States will pull out of the Paris Climate Accord in a celebratory ceremony in the Rose Garden on Thursday, ending months of speculation and reported jousting between White House factions.

“In order to fulfill my solemn duty to protect America and its citizens, the United States will withdraw from the Paris Climate Accord,” Trump said. “So we’re getting out.” The 2015 agreement is the most ambitious international pact in history to combat global warming — and the reaction by many was swift and furious.

Barack Obama released a statement criticizing the decision to exit the agreement, which was signed by 195 countries during his presidency, saying he hopes the rest of the world continues to fight global warming “even in the absence of American leadership.” Tesla’s Elon Musk tweeted that he will follow through with his threat to leave Trump’s advisory councils. CNN’s Fareed Zakaria called Thursday “the day that the United States resigned as the leader of the free world.”

Am departing presidential councils. Climate change is real. Leaving Paris is not good for America or the world.

But, the true fury erupted on social media, where liberals (and some conservatives) were quick to lambast the decision. Phrases and hashtags connected to the Paris Accord dominated Twitter, with mostly negative (and some mocking) commentary.

This is the darkest day of this administration so far. Purely vindictive and destructive.

Coulter is at least honest for the reason Trump made this decision: to piss off the left. https://t.co/flpmMPM4b9

Leaving Paris is not a "win" for anyone. There's something wrong with a society in which there's a Rose Garden celebration for such a thing https://t.co/BjJLDNUWd7

The talk about which Trump aides won or lost in the Paris decision is so stupid. There are two losers, the US & the planet, and no winners

Shocking that Ivanka didn’t save us in the end.

Climate change is a hoax is by far the most destructive and widely-held conspiracy theory in American politics.

Dear planet, we're sorry. Please just hang on for three and a half more years and we'll fix this. We promise.

.@POTUS withdrawal from Paris Accord will forever damage our planet and our standing in the world. There is no Planet B, Mr. President.

A quick look at, following Trump's decision to withdraw from the Paris Climate Agreement today, where the rest of the earth stands pic.twitter.com/cwP8FOFD8n

The Paris Climate Accord was agreed upon in December of 2015 and went into effect just before the 2016 election. It lays out an ambitious plan to gradually reduce manmade greenhouse gas emissions to zero over 40 years, through a reduction in fossil fuel use and reforestation. Ultimately, the agreement seeks hold the increase in global average temperature to “well bellow” two degrees Celsius.

Environmentalists lauded the agreement as a historic step toward curbing climate change, but its supporters formed an unlikely coalition. Along with Democrats, many business executives and some Republicans supported the measure. The president’s daughter Ivanka and his secretary of state — former oil company chief Rex Tillerson — also both reportedly urged Trump to stay in the agreement.