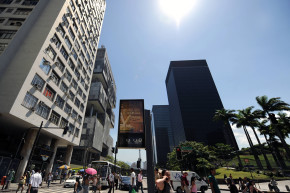 Climate Change Will Roast Cities Twice As Badly As Everywhere Else

Cities trap heat more than anywhere else, and that means global warming could be extra costly

Global warming is, pretty obviously, a global affair, but that doesn’t mean everywhere will feel the heat equally. Cities, which contribute more carbon to climate change than anywhere else, will also get hit by rising temperatures most severely. And if we don’t properly consider how much hotter cities can get, bringing Earth’s climate back under control could prove next to impossible.

Writing in the latest issue of Nature Climate Change, an international team of researchers looked at the economic costs of climate change in cities. Previous studies have suggested the biggest cities could feel an extra two degrees of warming, while the average cities would likely get about an extra degree hotter. The price of all that could prove staggering. By 2100, the hardest-hit cities could lose as much as 11 percent of their gross domestic product each year from dealing with the effects of climate change, while the average city would still lose six percent of its GDP.

The real problem, according to the researchers, is that previous estimates haven’t considered what’s known as the urban heat island effect, which is what makes cities even hotter than they would otherwise be. Asphalt and concrete cover cities rather than forests and bodies of water, and those building materials absorb heat far more than natural surfaces would. Throw in the heat generated by traffic and all the power it takes to keep a city running — including, ironically, all the air conditioners people need to stay cool — and cities end up multiple degrees hotter, as well as be more vulnerable to extreme heat waves. All that is bad news not just for the environment but for the health and wellbeing of those living in the overheated cities.

Factoring in how much hotter cities will be could really matter: The most optimistic climate projection with the heat island effect factored in is still worse than the most pessimistic estimate that doesn’t consider it. And cities around the world are growing, both in terms of their importance and size.

In other words, cities are our future, just like climate change. Figuring out how to make those two work together will be one of the big challenges for the next century, according to the researchers: All the hard work of cutting emissions and lowering temperatures globally could still be undone by a few out-of-control heat islands in our biggest cities.