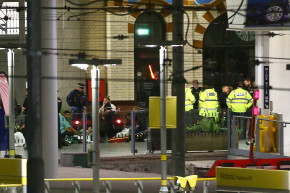 Children Among 22 Dead After Explosion At Ariana Grande Concert

Multiple casualties were reported in the incident in Manchester, England

At least 22 people are dead and 59 others wounded after an explosion at an Ariana Grande concert in Manchester, England on Monday night, according to police reports.

“There are a number of confirmed fatalities and others injured,” wrote the Manchester police in an initial statement posted on Facebook. “Please AVOID the area as first responders work tirelessly at the scene.”

Witnesses say they heard a bomb-like blast shortly after Grande finished her routine at Manchester Arena, which holds 21,000 people. The blast, said to have come from a man wearing explosives, occurred outside the arena as people were leaving.

“By the time I got outside there were so many people crying and standing in the road,” a concert attendee identified only as Sarah said, quoted by the Manchester Evening News. “It was absolute chaos. I saw people covered in blood. I have never been in a situation like this before.”

“Deliberately choosing the time and place to cause maximum carnage, and to kill and injure indiscriminately,” British Prime Minister Theresa May told reporters on Tuesday that police believe they have identified the “single individual” responsible.

Social media was flooded with posts showing chaotic crowds, streaming out of the concert venue — along with expressions of worry and condolences for those wounded.

EXPLOSION AT MANCHESTER ARENA AND EVERYONE RAN OUT SO SCARY😭 pic.twitter.com/pJbUBoELtE

Police and authorities have flooded the area in downtown Manchester and by Tuesday morning the area was still on lockdown.

Brussels, Belgium and Paris, France have been hit by large-casualty suicide bombings in the past 18 months. As part of a coordinated attack, a group of three suicide bombers killed 89 people at the Bataclan theatre in the French capital in November of 2015.

There has been no statement or word from the Islamic State claiming responsibility for the attack as yet.